A Holiday at Home

Summer can be a slightly depressing time of year, as more and more of your friends and relatives embark on vacations to exotic climes that you either cannot afford, or have not the time to enjoy, and even the comforts of home can become somewhat stagnant. Therefore, I write this piece in response to those with the luxury of free time, but perhaps not the position to take best advantage of it, so that next year you can bring the tropics to your own backyard.

Below you will find a group of plants possessed of the exoticism to facilitate a figurative escapism, but the hardiness to not make your garden a rude awakening for them should the notorious British weather turn on you. 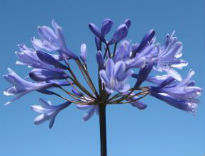 This attractive semi-evergreen perennial has striking blue, globular inflorescences that will grow to heights of 90cm. But while this plant is hardy enough to endure outdoor winter conditions, it is recommended you regulate watering and mulch well to prevent hard frost damage. 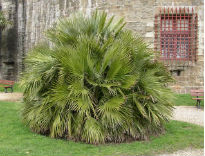 With the common name of ‘Dwarf Fan Palm’, this is a hardy, evergreen palm whose fronds are reminiscent of the arid Mediterranean. It is quite slow growing and will probably not get above head height in the British garden. 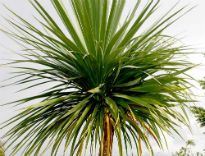 This is another palm for our list, although this one originates from Australia. This evergreen has long, strap-like green leaves and may also bear large sprays of flowers in summer in ideal conditions. It will get to about 10ms tall in very mild areas of the UK. 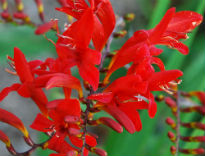 This ominously named deciduous species likely garnered its moniker from the intense red colouration of the arching flowers it bears throughout the summer – a real eye-catcher. The flower spikes reach to about 90cms tall. 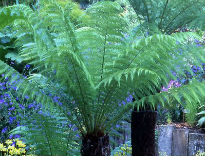 Dicksonia are a species of tree fern whose porous trunk is entwined with thin fibrous roots that feed the crown of bright green foliage. Plant in a shady position and water the trunk frequently in dry weather.  In the UK they can reach to up to 4-5ms tall. 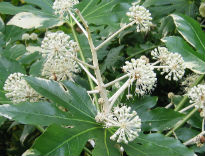 One of Japan’s best worst kept secrets is the profuse amount and variety of flora that has invaded the English ecosystem in recent centuries. Species like the Fatsia are consistently overlooked despite their glossy foliage, intriguing clusters of small, white flowers and distinctive black fruits. They are hardy in the UK and will grow in sun or shade, reaching about 2 metres tall. 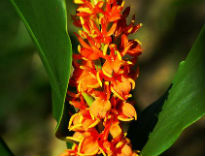 My favourite among its peers found here is the ginger lily, ‘Assam Orange’, whose tall, carrot-coloured blooms appear as pillars of flame amid the lances of green foliage it bears and this complemented by the gorgeous fragrance they produce. Mulch over the tubers in winter to protect them from frost. 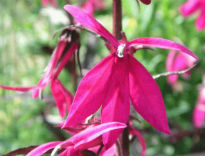 In step with the genuine article, the ‘Russian Princess’ is an upright specimen whose beauty is consistent from bloom to leaf which will appear magenta and purple-bronze respectively, however, be warned that this maiden is fairly toxic and can cause severe discomfort if ingested. End metaphor. 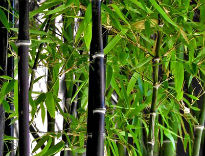 If there is a lone genus that can better evoke the mystique and power of the jungle then I am unaware of it, and this Bamboo will be Rembrandt’s black to the many colours of your garden, insinuating drama through both its starkness, and sheer size growing to up to 4 metres tall! The sound of wind through bamboo is highly evocative too. 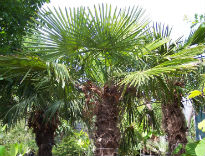 We end this with an absolute picture of the tropics and Trachycarpus fortunei, or ‘Chusan Palms’ as they are commonly known, are large, evergreen palms with interesting, fibre-covered trunks and their floppy, lance shaped foliage, arranged in fans, will provide a back drop for their sprays of yellowish flowers and globular fruits. They are hardy in mild areas, although cold winds can shred the leaves, and can reach a height of up to 10 metres.