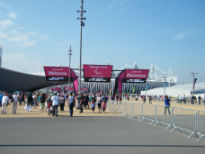 One day Floral & Hardy’s top designer, Helen Ellison and I were lucky enough to visit the Olympic Park in Stratford that, despite the passing of the main Olympic events, was electric with excitement, frivolity and anticipation in the wake of the Paralympics and amid the splendour of the site itself.

My initial reaction was, in a word, awestruck. However, this barely does justice to the massive achievement and marvellous legacy that the Olympic park truly represents and so, having had a few days to digest what I saw, I’d now like to highlight my favourite aspects of the park and gardens.

Upon entering the site from Stratford City we were first guided through a series of security check points – the courteous efficiency was pleasantly surprising, given that we were part of a crowd up to 250,000 strong.  Then we were greeted by the sight of the stadium itself that, most recognisable from the night-borne opening ceremonies, loses none of its majesty in daylight. 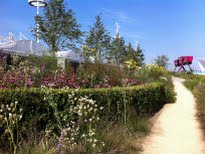 However, we were there in the name of horticulture not athletics, and so we set our sights first on the Olympic Park Walk which features the continentally planted gardens mentioned in our previous article on the subject. We had a mixed response to this area of the park because, although they were among the most deliberately planned areas, many of the more exotic cultivars had suffered greatly in sweltering days leading up to our visit and their age had begun to show. 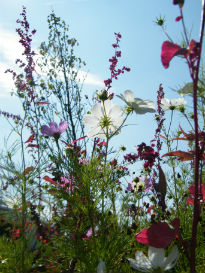 On the other hand, there were many plants that had not yet begun to wilt and these more than compensated for their short-lived counterparts. We particularly liked the way the soft prairie-style plantings contrasted with the strong structures of the buildings 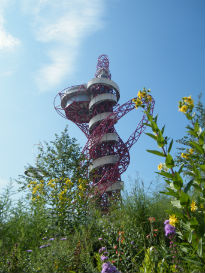 – the Orbit for example. 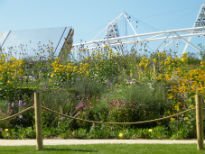 Amid the horticultural areas of the park there were also several rather innovative art installations and one of these served as the midway point to the Olympic Park walk – beneath the Stratford walk bridge fell sheets of water whose spouts were designed in such a way that the liquid intermittently spelt out words that related to the project – brilliant! 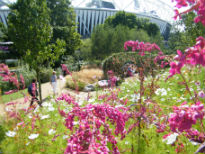 From the World Gardens we headed next to more familiar climes – ‘The Great British Garden’, and this title is in no way hyperbolic as the area in question played host to not only some fine horticulture, but also to the country’s youth by sporting children’s activities and miniature sporting challenges, which we’ll into go greater depth on in part two: The People of Olympia.

The British Garden was also my favourite example of the use of water within the parks design, sporting as it did a naturalistic pond to observe from the shaded paths that ran throughout. 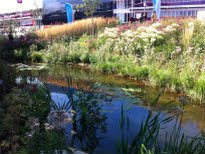 We also spent some time in the ‘Wetlands Walk’ area of the park, however, this aspect of the Olympic Park will be included among its other ecological elements in Part Three: The Olympic Legacy – watch this space!

The People of Olympia
Britain’s Bravest