A short time ago, in our review about the RHS London flower show, we talked about the value of natural screening in the garden and this week we wanted to devote some more time to the subject, and specifically the benefits of growing Bamboo. It’s a rare and wonderful plant that can engage you on multiple sensory planes, but Bamboo is one, as, aside from its obvious value for scale (due to a growth rate paralleled, in some cases, only by Knotweed!) and thus its ability to manipulate the allocation of light and shade in your garden, it is also wonderful for sound and movement. 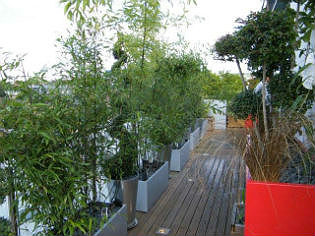 Let us first address its most obvious use – that of border reinforcement or simple decoration. Due to the excessive heights some can reach, Bamboo can be a dramatic addition to any garden, provided it is well cared for and has the space to grow to its potential. Common varieties such as Sasa veitchii have especially broad and virulent foliage and as such provide excellent privacy, as well an ecological base for insects and small mammals, but be careful – they can soon outgrow their allotted space. Taller, but less invasive species, such as Phyllostachys can also provide excellent screens.

Secondly we have the sound aspect of Bamboo – due to the species’ slender stems it is susceptible to wind movement and, because these stems are formed of rather dry, brittle material, they tend to hiss when the wind rubs them together making Bamboo a gentle, natural wind chime.

So, below you’ll find a variety of different Bamboo species that can be cultivated in the British garden, complete with their optimum growing conditions. Take note of their ultimate size however, and choose accordingly! 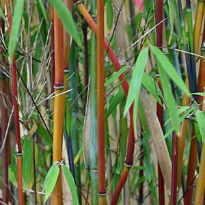 Also going by the handle of ‘Chinese Fountain Bamboo’, ‘Red Panda’ is an upright evergreen with a clump forming habit whose informal moniker stems from the crimson tint that its stems take. It maintains this same colour through all seasons, hence the perpetuity that such water imagery lends. Chinese Fountain prefers a heavy soil base i.e. clay or loam, however, it is not choosy when it comes to positioning, ph. levels or exposure. Eventual height is 3.5ms, and spread 2.5ms. 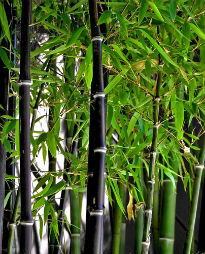 Commonly known as ‘Black Bamboo’, this species is also an evergreen with bright yellowy-green foliage which gives it a marvellous contrast to the dark colour of its stems. Its habit too is the same as the Red Panda – upright -, however it has a more independent arching shape to its limbs. However, due to this singular growing shape, they are susceptible to wind and frost damage and as such you might want to consider growing them against a wall where they will have greater support from the elements. Eventual height is 2.5 – 4ms, and spread 1.5 – 2.5ms. 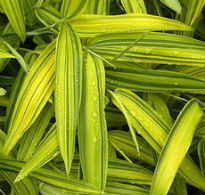 As can be discerned from its common name – that of ‘Pygmy Bamboo’, this cultivar has a compact growth cycle and slender, arching habit. Despite its small stature however, the Pygmy is a riot of colour, showing deep purple canes year round, accompanied by sulphur yellow tipped foliage, whose lance shaped leaves are tipped with emerald green. Similar to the nigra, these plants can be quite vulnerable to adverse weather conditions, so it is important that you provide some shelter,  if only to ensure that they establish a strong foundation in the (preferably) loamy soil in which you plant them. Eventual height is 1.5 – 2.5ms, and spread 1.5 – 2.5ms.

Sasa is a vigorous, spreading Bamboo which forms clumps of foliage that bear broad leaves on slender, arching canes of emerald rimmed in ivory. They are evergreen but their leaves will not maintain the same colour, instead turning to a ruddy brown in the winter. They prefer well-drained soil of any composition or location. Eventual height is 1.5 – 2.5ms, and spread 2.5 – 4ms.

More commonly known as ‘Narihira bamboo’, the fastuosa is a very tall, clump forming cultivar with thick, pale green canes that bear tufts of stubby dark green foliage that will assume silver/grey quality during autumn and winter. They need a loam based soil and prefer it well-drained and acidic. Eventual height is 4 – 8ms, and spread 1.5 – 2.5ms.

Some Fine Ferns
Return of the Butterflies