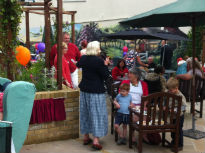 Paraphrasing Birling House’s Board of Trustees’ former chairlady, Mrs Margaret Ivell, ‘A Room Outside’ is the description she gave to Floral & Hardy’s design for a communal garden at Birling House at a recent party to celebrate its opening. Birling House is a care home in Snodland, Kent, owned and operated on behalf of The Mortimer Society which specialises in the care of those who suffer with learning disabilities, and more specifically Parkinson’s and Huntington’s disease.

The design and build process was made possible by one of the care home’s residents, and now one of its major benefactors, Liz, for whom the garden is named and whose mother put the vast majority of the funding necessary to make this project possible. The design phase began in January and according to Birling House’s Chief Executive, Paul Studd, the top priorities of the space were accessibility and interactivity. 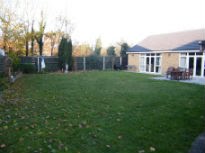 Due to the severe nature of some of Birling House’s residents’ conditions, it was paramount that it be made more accessible, both physically and visually. Paving had already been laid near to the buildings, but the rest of the garden was laid to lawn with some rather uninspiring flower beds around the edges. While the original paving could be kept and integrated into the new garden, new paths and stable, paved seating areas needed to be added in order for the residents’ large wheelchairs to have easy access to the whole space. 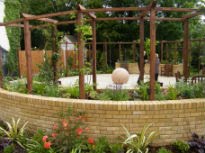 One of the other major innovations was the use of raised beds – knowing that many of the residents at Birling House were wheelchair-bound, our designer, Helen Ellison, adjusted the heights of the central flower beds a) to ensure they could be viewed directly from a seated position and b) that the foliage and flowers themselves were in easy reaching distance from either side of the beds. To further encourage such interactions Helen incorporated species such as Stachys and Pennisetum into the beds that are known for having soft, furry leaves and fluffy, ‘squirrel-tail’ flower heads respectively. 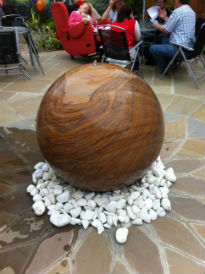 It was important that the garden be stimulating on a multi-sensory level and this included everything from the feel of the foliage, to Bamboos providing aural stimulation when shaken by the wind, together with the gentle sound of water trickling over the central water feature. 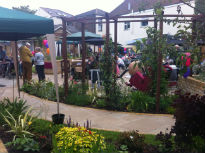 The sense of smell was looked after by a careful selection of scented climbing plants on the pergola, including Roses, Jasmine and Honeysuckle, while the eye is drawn to colourful, vibrant perennials, such as Crocosmia, Hemerocallis and Geraniums. 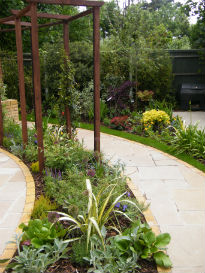 As part of the residents’ contribution to the garden, the Birling House Activities Team also collected their thoughts on what to include in the garden and the most popular theme was colour. In response to this, Mr. Paul Studd and the rest of his team devised some homemade lanterns from recycled glass bottles to be hung over the beds. 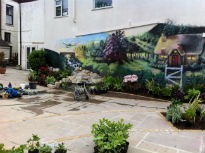 Another major theme that dictated much of the atmosphere of the garden was whether to include the existing large mural painted by a former carer at Birling House. It was originally thought that it would have to be removed or painted over for the garden, however, with a little creativity, Helen was able to integrate part of its scenery into a large water feature at the back of the space and thus save the picture. 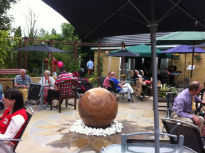 When asked how he rated the project’s success, weighed against its original mission statement, Paul Studd remarked that it was ‘Wonderful’, citing the cleanliness and politeness of the labourers during the building, and that the whole process had been a joy, while one of the board’s Trustees had this to say:

“Wonderful, really wonderful..… and the main thing is that sense of taking part interactivity.” 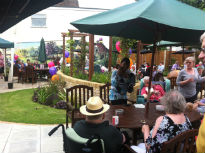 And it really was great to see the garden being used for the purpose for which it was built – for everyone to use and enjoy.

Fantastic Foliage
Hail to the Heathers