Nature, and more specifically its minutiae, comprises probably the oldest topic of recorded artwork – dating from the documentation of prehistoric animal and tree life in the cave scrawls of our ancestors, to Van Gogh’s Irises, arguably the most lucrative bouquet in history.

This week I’ll be reviewing some of the most famous flowers of the art world and the inspiration behind their conception or rather, perception, through the eyes of the artist. 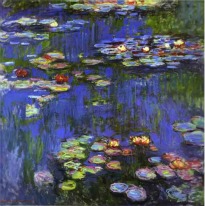 Perhaps the most famous French artist in matters of natural beauty is Claude Monet (1840-1926), an impressionist painter famous for favouring the plein-air technique of rendering a work outdoors. The term impressionism was coined from one of his more prodigal works Impression, Sunrise. Aside from his obvious contributions to the philosophies behind the artistic movement, Monet was also responsible for a myriad of some of the most famous nature based paintings in a series titled simply Water Lilies. His realistic rendering of reflection and shadow concerning both the fluidity of water and the stasis of the lilies themselves, lent new credibility to the out of fashion pastoral themes he was addressing. 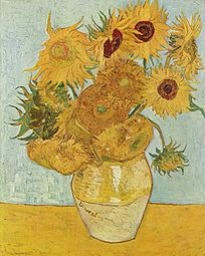 Painted shortly before his death in 1890, Van Gogh’s Sunflowers were to become the alter ego to the artist as a portrait painter. Lauded as his microcosmic edition of life and death, the series documents all stages of a sunflower’s life using the saturation of colour, and its absence, simultaneously to symbolise both the vivacity of youth and its stark briefness.

Incidentally part of this series is also one of the most expensive ever sold, fetching $39,000,000 at a London auction in 1987.

However this price tag is dwarfed by the next entry on our list, also a Van Gogh and previously mentioned, the Irises were dubbed by Van Gogh as “the lightening rod to my illness”. This is widely considered a reference to the lack of realism attributed to the painting’s use of light and colour that does not represent the angles it evokes, nor the perspective in terms of fore, and background. Dated prior to Van Gogh’s asylum stays due to anxiety, critics say the painting is absent of any tension and rather it is the unnatural evocation of perspective that strikes the viewer. This Dutch contribution, after inflation, broke the hundred million mark making it by far the most lucrative set of petals in history. 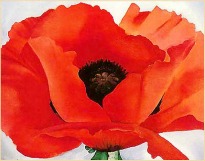 Next we have a somewhat more contemporary entrant. Georgia O Keeffe was a twentieth century artist partly known for her floral work. Beginning her education at the Chicago School of Art in 1905, she did not come to prominence until 1912 following her brief stint as an art teacher in Texas. It is now safe to assume that much of her inspiration was drawn from her primary work locations in New Mexico where she spent a part of every year of her adult life. Her movement was known as imitative realism and she was to become one of the century’s most famous American painters. She spoke of why she painted flowers; “Nobody sees a flower – really – it is so small – we haven’t time – and to see takes time, like to have a friend takes time…So I said to myself – I’ll paint what I see – what the flower is to me, but I’ll paint it big and they will be surprised into taking time to look at it – I will make even busy New Yorkers take time to see what I see of flowers.” 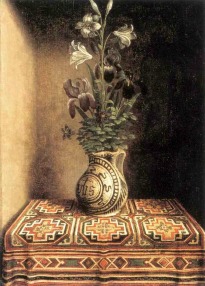 Hans Memling, by contrast, is a fifteenth century artist whose importance arises from his predating the renaissance period, before which there was heavy focus on religious exaltation within art. Despite the relatively neutral form of the piece dubbed Flowers, critics still insist on its highly religious connotations. This could be attributed to the reverse side of the painting that presented a praying man as its subject, but while no literal connection can be drawn between the two, the themes of the latter, as well as its context, are probably what caused religious underpinning to be applied to Memling’s seemingly neutral vase of flowers. While not a genre he explored in great depth, this painting remains one of the most senior examples of what was then described as hyper real rendering. A particularly applicable title, post David Hockney, as it was his research that revealed Memling’s use of an optical projector that threw the image onto his wood canvas allowing him to then trace over it with oils.

I hope that you found my list of flowers in art informative or at least encouraging, as to the inspirational potential of what are essentially common flowers. And now – to your own canvas that awaits a gentle hand to render meaning and beauty.