The RHS has recently scaled a full alert for gardeners concerning the arrival of a militant and dangerous new pest in the UK, the Blue Mint Beetle, or Chrysolina coerulans, that have been confirmed as breeding in the British Isles since 2011. This confirmation was reached thanks to the joint efforts of both the Society’s entomology department and in particular, an anonymous gardener based in Kent who provided their specimens. However, due to the isolated nature of this incident, the RHS is keen to investigate whether it might be a containable invasion, or a graver cause for concern. 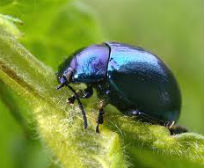 The insect’s name is derived from its primary source of food, cultivators of which have already suffered massive losses across mainland Europe. The principal scientist on plant health, Andrew Halstead had this to say:

“At the moment our control suggestions are the same for both our native green mint beetle and the new incomer… If the infestation is more extensive then it may be necessary to apply a pesticide. An organic insecticide, pyrethrum, can be used on mint to control pests… However, it may not be effective to control the adults and so other insecticides, such as deltamethrin or lambda-cyhalothrin, may have to be considered.” 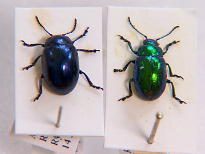 Therefore, the RHS’ request is as follows: be vigilant for unusually frequent signs of beetle damage and bear in mind that our native Green Mint Beetle is generally focused on wild mint and so shouldn’t affect garden varieties too greatly. These symptoms include holey foliage and obviously the beetles themselves which come in a pearlescent, metallic navy blue-similar in size to the native species – and if possible you should document live specimens through either photography or sending packages containing the live samples to the RHS Advisory Service in Wisley.