There are a variety of different reasons for establishing definite and long term boundaries around your garden and these can include privacy, security (from natural, as well as human threats) or just protection for  your garden against animals who may wish to make your planting scheme a part of their food chain!

Any way you cut it, there’s plenty of justification for defining your borders, so the only difficult decision is the manner in which you do it. Of course, as is the custom with all tough decisions, this is where the options become really varied, because as a near essential function within any successful domestic garden, the techniques of bordering have become a saturated market, with each proprietor eager to flog his or her variation on the same idea.

The major variable with building a garden wall can revolve around one’s locality, in that, depending on where you’re situated, certain materials will be far more convenient and cheaper to obtain. The style of construction will also affect the ease of your build – we all know that flat, straight edged stones or bricks are superior for their long term durability, however, the style of the area you live may dictate a more naturalistic approach – dry-stone walling or flint, for example. One of the advantages of natural stones is that, while man-made materials deteriorate over time, the preliminary layers of natural stone will strip away under weathering to expose yet richer colouring. Wonderful old red brick can also look beautiful in a traditional setting and, for front gardens particularly, with the addition of wrought iron railings, can look great.

Alternatively, there’s also the option of contemporary, rendered block-work walling – though out of their element in a naturalistically designed, countryside garden, in an urban environment they can provide a sustainable and reasonably cheap alternative to stone or brick.

‘Hempcrete’ is another alternative to concrete blocks and, for those with an eye to sustainability, it is an excellent choice. It is made, as its name suggests, with a mix of hemp and lime and is completely biodegradable. At the end of its life, it can simply be chopped up and composted. I have something of a bias on this because it is a material that Floral & Hardy used extensively in their excursion to Hampton Court Flower Show in 2008. So, for the eco-conscious, Hempcrete may be the way to go as, not only is it sturdy and attractive, it is also totally recyclable.

The advantages of fencing over a garden wall are fairly obvious, in that traditional wooden fencing is not only more sustainable than concrete or brick, it is also considerably cheaper, both in materials and labour to build. It is also softer on the eye. However, as with the walling option, fencing can be just as, if not more, varied in its approaches.

Perhaps the cheapest form of fence panel is the ‘waney’ panel, which has horizontal slats of timber, however, it tends not to be very long lasting.

Shiplap is a type of fencing abbreviated from the overlapping style of ship building and, as such, its style is defined by a number of horizontal, or more commonly vertical, slats overlapping one another within an oblong framework and is one of the most common forms of fencing in the UK.

Other, more fancy panelling is a technique that is so eclectic that it has become as much a part of landscape design as it has interior design, lending either a contemporary or traditional feel, whatever your preference. 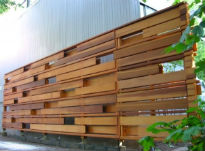 Though leaving you somewhat more exposed than solid block fencing, trellis is also an excellent choice for your borders, as it’ll allow more light into the garden as well as provide support to climbing plants.

Now, in contrast to the previous entrants of the fencing list, the picket fence, the split rail and the wire fence definitely allow prying eyes in, rather than keep them out, as the element that the three have in common is the evident gaps between their solid materials. The white picket fence has become almost a character unto itself in idyllic suburbia, and there’s no guessing as to why as, aside from the innocence exuded from its characteristic hue, the picket fence indicates openness with those viewing your garden, and a pride in what it is they’ll be viewing beyond the fence. 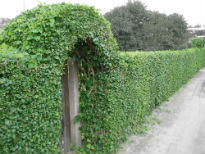 This journalist has done to death the ecological benefits of maintaining a healthy hedge and won’t waste another character covering the subject here. All I will say is that hedgerows are easily maintained, extremely cost effective and characteristically very rewarding because you, the gardener, have had the benefit of seeing them grow from the ground up. They can provide habitats for wildlife and a softer look to the boundary. However, it is important to note which species you plan to use before beginning development of this border and while the evergreen species, such as Laurel, Yew and Privet, possess the obvious advantage of being a year round plant and thus providing a reliable source of privacy and security it is important to note that the deciduous varieties, including Beech and Hawthorn, have their place too and provide welcome changes through the seasons. 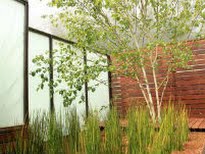 Finally, there are newer innovations such as glass or fibreglass panels, either clear or opaque, and which also come in many colours, which would provide a windbreak as well as screening in a contemporary space. Think of opaque glass balustrading for your balcony, or panels separating different areas of the garden, whilst still allowing light through and the shadows of interesting foliage plants to play on the glass.

So the choice is yours, but one thing’s for sure, boundaries don’t have to be boring!

Gardening Around the World: The Top Ten Gardens to Visit … continued
Building a Night Garden