With the New Year, the Royal Horticultural Society ushered in a new batch of contestants for the annual ‘Britain in Bloom’ competition, where hopeful communities from all over England compete to be honoured as champions of Britain’s ecology.

The objective of this RHS phenomenon is to encourage public contribution to the natural aesthetic and environmental consciousness of the country, and the three categories, against which finalists are marked, reflect this. In this year’s competition, centred on the propagation of Britain’s wildflowers, of over 1000 potential winners, only 79 finalist have been considered. Thought of by many as one of the most significant environmental campaigns in England, this year’s entrants have collectively planted over 400,000 new trees and shrubs, alongside 21,000,000 new flowers and bulbs, in more than a thousand different communities nationwide. 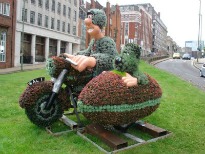 Colloquially referred to as ‘The Bloom’, the competition began back in 1963, following the French example ‘Fleurissement’, and was founded on three guiding principles: Horticultural Excellence; Environmental Responsibility; and Community Participation. In 2002 the Bloom became a vassal of the RHS, who have been overseeing it ever since. A judging process that spans the whole of summer ensures commitment of the highest standard, even once the judge’s opinions are gathered, and that this be a labour of love and not glory. There are two levels to this process, the regional and the national judging stages – generally 70 communities qualify from the regionals to national level to be honoured for their achievement.

Last year’s winners are based on a variety of different townships and cities, based on size and their ecological locations, specifically urban vs suburban and countryside vs coastal communities. The beauty of the project is that there are tasks for every level of interest or commitment – the project is judged based on the overall cleanliness and meticulousness that can only be achieved with persistent effort. To get involved you can access the RHS website to find a project local to you that will include responsibilities such as events planning to raise funds or awareness, to litter picking, to wildlife conservation.

The triumphs of the project are rife across the UK – the city of Nottingham has been practically transformed from its past perceptions as a crime capital, by the introduction and continued success of over 160 neighbourhood gardening groups who have been working in conjunction with the RHS since the start of the millennium.

The benefits of such a project are far reaching and numerous and deserve such recognition. The initiative encourages communal labour for the personal betterment i.e. the improvement of safety and beauty within a shared environment. It encourages a group psychology benevolent to our domestic ecology, as well hard work on behalf of your fellow man and, by including families, it teaches a civic and natural responsibility to future generations. Aside from this, it provides national incentive to take notice of our environment, one which we ourselves adopted from our French neighbours and can hope, in future, to encourage in other nations. It’s at the very least a baby step to increased environmental awareness.