Since 2010 and aside from granting us the longest day of the year, the summer solstice has held a new meaning for the gardeners, as it marks the beginning of the nominees process for the Gardening Against the Odds awards, which recognise horticulturalists who, despite incredible opposition and difficulty, have striven to pursue the practice of gardening, both for their own pleasure and also for the future enjoyment of others.

Of course, the tragic beauty of this competition is that hardship comes in innumerable different forms, but what it does mean is that more or less anyone opposed, in whatever way, in their gardening can qualify. Previous entrants have varied from the physically disadvantaged, to those in dire financial straits and, perhaps most heroically, at least within their field, those who’ve deliberately worked against an unforgiving environment or inhospitable surroundings to ecological ends.

The project is run by the Conservation Foundation in conjunction with the Telegraph and began as a form of remembrance for Elspeth Thompson – a prominent writer of horticulture who herself battled depression for most of her life. Last year’s winners were Sherborne Allotments, who are situated in Essex and who transformed two derelict plots into community growth areas, with the help of sufferers of Huntington’s Disease. 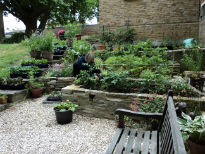 Previous winners have also included military veterans who created a communal garden at their barracks, and a garden for the elderly in North Wales, salvaged from what was previously a derelict rubble yard.

The judging panel changes each year – the project is now in its third year – and is generally composed of a ‘who’s who’ of horticultural, ecological and conservationist personalities. This year’s panel includes director of the Chelsea Fringe, Tim Richardson, conservationist David Bellamy and designer Bunny Guinness.

So, if you know of someone who is gardening against all odds and deserves some recognition, you can still nominate them at the RHS website, but get in quick because nominations close on 17th September.