Champion Trees – we have your winners…

There is a national tree register, whose patron is the Prince of Wales, which contains a compilation and maintained a list around 4,000 of the most superlative trees in the British Isles. The trees are judged based on a variety of different attributes, such as height and age.

The subject recently became prominent due to the outcry against the felling of one of Britain’s most elderly Caucasian Wing Nuts due to a bad case of trunk rot that could endanger future spectators with the possibility of collapse.  The 38.2 m tree, planted in 1845 in Weymouth’s Abbotsbury Subtropical Gardens, is a sad loss and we’d like to raise awareness about the more prominent members of the list of what are aptly named the ‘Champion trees’.

So let us begin with those champions of the tallest stature. 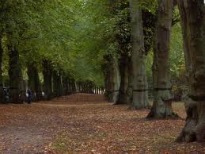 Our gold medallist is a Common Lime tree situated at the Edenhall Estate in Cumbria, standing at over 45 metres tall with an average trunk girth of 408 cm.

Our second place in the height category belongs to a European Beech in Gloucestershire measuring at 43 metres. However, on the world scale, the tallest in Britain are dwarfed thrice over by a Redwood on the Pacific coast.

The giant Redwood in California’s national park was aptly named ‘Hyperion’ by its discoverers in 2006 and stands at over 110 metres tall! Some Redwoods are so large that roads have been built through their living trunks! 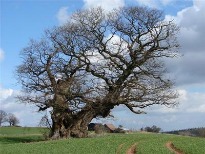 Next we have the category of girth, or trunk thickness and this was a closer contest with our winner only doing so by a margin of a few centimetres – a Sessile Oak in Cheshire with an average trunk thickness of 1401 cm. The silver medal goes to a French Oak whose home is in the Great Witley Estate in Worcestershire.

While not tourist attractions directly, these champions of their kin would make for an excellent pit stop were you to find yourself in their proximity – probably best to see them now before they face the same fate as Dorset’s ancient Wingnut!

Or, if you have a particularly large or ancient tree, you can use the Tree Register’s online measuring form to find out if it should take its place among the champions!