Clematis for all Seasons

Due to their exoticism and beauty, Clematis have garnered a reputation primarily as a summer plant but with adequate planning and variety you can plant a garden of healthy, beautiful climbers whose staggered blooming ensure flowers for every season. For your consideration there is below a list of appropriately eclectic Clematis varieties that combined could, someday, form just such a tapestry. 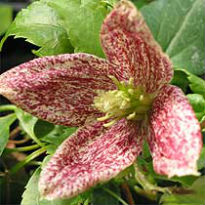 To commence the shortlist we have a cultivar that, being an evergreen, will provide background colouring even when it is itself not in bloom. However, during its flowering season ‘Freckles’ will show broad palmated petals whose centres, though rimmed in a pale yellow, are doused in deep plum speckles. An unusual flower as it holds greatest colour from deep winter to early spring. 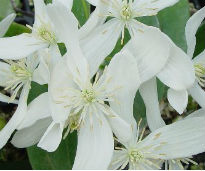 One of the fragrant additions to our list, Snowdrift will bear pure white, star-shaped flowers in early spring and its arrow-head leaves, themselves emerald green and glossy, are evergreen and borne year round. 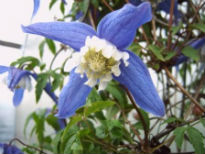 Blooming in vivid blue with white stamens, this deciduous late spring flower compensates with beauty for what it lacks in longevity. Francis Rivis is a past winner of the RHS’ Award of Garden Merit, the award being based on its durability in a variety of soils and ability to adapt to different climates. Its flowers are followed by silky seed-heads too. 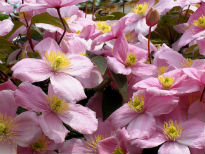 A smart investment for the long-term garden, the monatana Rubens clematis is favoured for its vigorous growth rate and vanilla fragrance – a particularly pleasant characteristic in late spring to early summer whose scent will be accentuated by warmer weather. The flowers are soft pink and the young foliage has a bronzy tint. 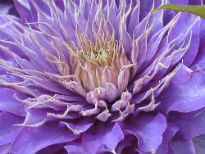 Although self-clinging, ‘Vyvyan Pennell’ is a relatively delicate plant due to its very large, double violet blooms in early summer, which can be quite heavy, and as such it is recommended that they be situated in a sheltered position. However, due care will be rewarded with a second flush of flowers later in the year. 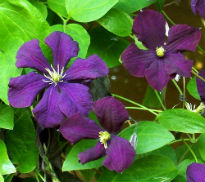 ‘Etoile Violette’ has, as the name suggests masses of small star-shaped, violet flowers from July through to September, but it has a much greater capacity for size – nearly two metres beyond the reach of Pennell. 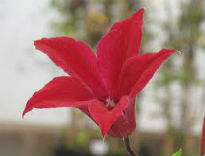 The ‘Gravetye Beauty’ is aptly named for its striking, but unusually shaped blooms which may be more familiar to lily and tulip lovers. They will assume a reddish-brown colouring with cream coloured stamens and you can expect these flowers in late summer and throughout autumn – aiding your palette with further autumnal colouring. 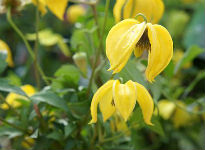 ‘Bill MacKenzie’ is arguably the most vibrant clematis on our list, with vivid yellow flowers whose petals droop in downward over deep red anthers and it maintains both with full colouring from early summer to late autumn. 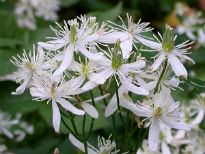 Commonly referred to as the ‘Sweet Autumn Clematis’, terniflora is possessed of a vigorous growth rate and semi-evergreen foliage. Accompanying this greenery, terniflora will also show an abundance of star-shaped, star-coloured flowers, appearing white with occasional silver banding throughout summer and autumn. 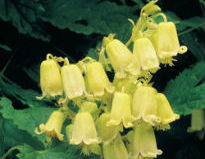 This species of clematis has late arriving flowers that will appear in autumn, as its foliage begins to wane. The blooms themselves are akin to blue bells in their form and buttercups in colour, whilst being accompanied by a sweet fragrance.

While you consider these options for your clematis garden, remember that timing is paramount to the success of a year-round flowering garden and don’t disregard the work load that will come with a garden whose active seasons are not staggered.

These warnings aside-good luck to you and we hope this list has been helpful!