Clematis are one of the most beautiful, versatile and, subsequently, popular additions to the British garden. Due to their ability to grow vertically on walls and trellis, in containers, or horizontally entwining with other plants and shrubs, it is no surprise that, once you have this cultivar established, you should want to maintain and ensure its growth for years to come.

There are many reasons for regularly pruning your clematis, not the least of which is their aesthetic, which will be greatly diminished by a lack of maintenance – without trimming the stems and shoots would grow tangled and bare and the majority of the plant’s beautiful flowers would begin blooming well above eye level. Aside from this, some varieties of Clematis can also be mildly invasive and so severe negligence could lead to the suffocation and demise of other less vigorous species in the garden..

There are basically three main groups when it comes to pruning: 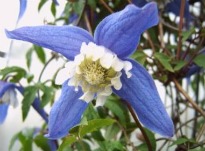 Group one Clematis flower in the spring and consist of those varieties generally possessing the lightest foliage and smallest blooms, although this is more than made up for by their numbers. This group includes varieties such as ‘Montana’, ‘Macropetala’ and ‘Alpina’ and all are characterised by flowers that bloom on the growth of the previous year. Only if necessary, pruning should occur immediately after the season’s flowering has finished, to remove any spent flowers that might inhibit future growth. Leave it any later than this and you won’t get any flowers next year. However the older, thicker wooded stems of the plants can be cut back with abandon, ideally to just a couple feet above their base. It may take some time for the plant to recover, however, and you should allow a year for newer flowers to show through, if they do not, assume that the stems were too old to rejuvenate and begin planting a new specimen. 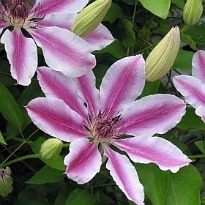 These cultivars generally comprise large, showy blooms and flower from late spring to early summer. They include varieties such as the striped ‘Nelly Moser’… 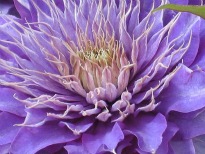 … and the beautifully double ‘Vyvyan Pennell’, and sometimes produce a second flourish later on in the year.

It is best to prune this group at the end of February or start of March by cutting them back by about two thirds, or to around a metre high, just above the bud ideally, but you can always start at the top of the plant and work your way down in order to ensure precision. The new shoots of this season will sprout from of those of the previous growths and so it is essential you be consistent with your pruning to ensure healthy growth year by year.

The pruning method and timing for group three is similar to group two, except that, as they flower later, you can be a bit more severe – all the stems should be trimmed to pairs of plump buds around 30cms above the soil. Group three clematis varieties include ‘Viticella’, ‘Orientalis’ and ‘Tangutica’.

A philosophy that is indiscriminate from one pruning group to the other, however, is the necessity of your initial maintenance – if the plant is a new addition i.e. it is without a few well established stems then it should be pruned thoroughly regardless of its variety to about 30cms above ground level. This will encourage multiple stems which can be trained onto supports to give a good distribution of flowers. If you wish to structure the plant vertically in an independent position it is important that you provide continuous support for the stems with canes or obelisks.

So, you see it’s not really complicated. Look after your Clematis and you can be rewarded with masses of colourful blooms throughout the year as, with careful selection, you can have a clematis in flower whatever the season.

Don’t Make a Folly of Foliage
Irrigation – What’s the Cost?