Plant division is one of the most common, not to mention cost effective practices that ensures consistent propagation. This means you can get new plants that are true to the original for free, and now is a good time to do it for many cultivars. In this piece we’ll discuss the proper approaches, the do’s and don’ts, and a selection of perennial plants that can be divided in order to increase their numbers.

Generally speaking division is considered a tri-annual activity, as its primary purpose is to maintain the health of the original specimen, particularly where perennials are concerned, as they can often become overcrowded and unproductive. However, it can be performed more regularly for purposes of propagation, and it is in this regard that timing becomes of paramount interest as, though many plants will tolerate division at more or less any time of year, best results are achieved when their growth cycle is considered and catered to. The universal rule of division is to avoid doing so during the period when the plant is actively growing and flowering, therefore, a summer flowering cultivar should undergo the process during autumn or spring, ideally during a dry period that will make the soil easier to manipulate, while the majority of spring bloomers, e.g. Irises, should be treated in late summer once they have completed their flowering, because it is at this point they’re most actively producing new roots. 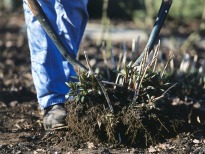 Now that we’ve established the ‘when’, we’ll discuss the ‘how’ – the act of division itself and, no matter the size of your perennials, every division begins with a pair of garden forks, or hand forks, depending on the size of the plant, which should be applied back to back to prise the roots apart. Do it gingerly in order to minimise the risk of root damage and a good rule of thumb is to start from the edge of the roots’ circumference and work your way in. 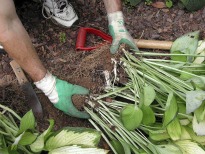 The majority of small, fibrous-rooted perennials, including varieties like Heuchera, Hosta and Epimedium, can be both exhumed and divided with relative ease. Relative to their size, larger cultivars such as Hemerocallis may require the use of a pair of forks sunk directly in the crown and then, using their collective leverage to split the root base in two; further division can take place after this is completed.

We must also consider those perennials like Helleborus or Delphinium, that have woody crowns and fleshy roots respectively, where it may be the case that a sharp knife or spade needs to be employed to get the job done. Finally, there are some plants that will produce individual plantlets on runners, which can be gently teased from the earth one by one and be immediately replanted.

Other perennials that can be divided to provide new plants include; Agapanthus, Bergenia, Convallaria, Dierama, Euphorbia, Gentiana, Helianthus, Primula and Verbena, among many others.

When re-planting the newly divided plants, it’s always a good idea to give them a bit of a feed, so sprinkle some organic fertiliser into the planting holes before putting them in. Make sure the soil is gently firmed in around the roots too, so that there are no air pockets which would cause the roots to dry out.

The next necessity for successful division may seem an obvious one, but its significance bears its mention – water, water, water. The reason frequent watering is so essential to healthy propagation is that, in order to maintain the host plant, you must supplement the sudden loss of mass that equates to a loss of absorption, and obviously the new plants will need a drink too.

So, best of luck to those of you who take advantage of, quite frankly, a financially and personally rewarding practise and don’t forget – you can often straightaway divide new plants you buy from the garden centre too to get even more plants for free!