We are all perhaps familiar with the stress and difficulty that comes from attempting propagation of our beloved perennial plants using cuttings or division, particularly the ever present threat of diseases that are so easily spread through such techniques. And once you’ve got past the dilemma of choosing appropriate plant material, which disease preventative measures to take in disinfecting your various cuttings and prunings, applying rooting hormones to ensure the plant has a strong start, only to find they’ve all rotted off, well, you might just as well have had a few kids and at least get the chance of a thank you!

On the other hand, you have the option of growing direct from seeds. Of course this provides its own plethora of problems – particularly in that initial year of establishment, but it is an inexpensive way of increasing your stock and you’ll find below a list of five easy to grow perennials that even the most inexperienced gardener can cope with raising. Sow inside in early spring for flowering the same year. Just follow the instructions on the packet!

Achillea, also known as Yarrow, has a reputation as one of the hardiest perennials in the world. Large, flat heads of tiny white, yellow, pink or terracotta flowers contrast well with the feathery grey or green foliage. They prefer sun and well-drained soil and they will tolerate dry conditions, though you should aim to water them twice weekly and fertilise as many times a season. In particularly rich soil Yarrow will spring to heights of up to a metre and may require staking. 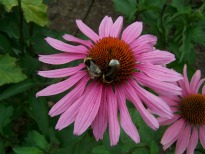 Echinacea, aside from its ease of growth, will also provide distraction for nearby butterflies and bees.  Plant out approximately 60cms apart as they will soon clump up. The soil in question should be of neutral ph. and well drained, however Echinacea is fairly tolerant to clay soils provided they are afforded decent sunlight. Blooms from June to October with white or pink, daisy-like flowers with a prominent  central cone. 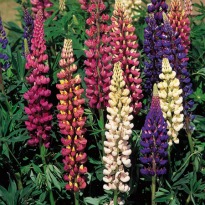 Lupins make for an excellent border plant and were a great favourite in old cottage gardens, however, it is a slow burner in terms of propagation, so it’s important you observe patience. Sow early to allow the flowers time to mature for their mid-summer blooming period.  Lupins prefer a partially shady spot in the garden and an acidic or neutral soil and flower in a variety of colours, including bi-colours. 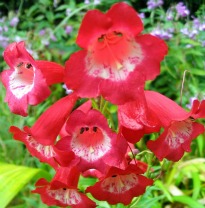 Penstemons have a long flowering season and come in a range of colours, from white, to pink and red, through to deep purple. They will perform best in a gravelly, well-drained soil and should be planted out near the end of spring to ensure no risk of frost degradation, making sure you provide enough space for each plant – to the tune of 45-60cms. Being a shallow rooted cultivar it is important that Penstemons be watered regularly and the soil be enriched with fertiliser throughout the growing season. I would also recommend a shallow layer of mulch to discourage nearby weeds. 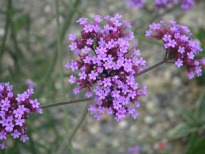 This hardy perennial’s delicate appearance belies its tolerant nature. Its tiny mauve flowers are borne on tall, wiry stems, but it will flourish in a sunny or shaded dappled spot and, should it suffer frost damage, it will self-seed with interest on your losses. It is very tolerant to drought and sandy soils, though some organic matter is recommended in the initial planting, supplemented by regular fertiliser e.g. chicken manure. Verbena goes well in most styles of garden but contrasts superbly with banana trees, palms and bamboos in a tropical scheme.

Expanding Your Horizons
Which Water Feature?