Following our initial list of five of the most common and destructive garden diseases, we now have numbers six to ten,  their most recognizable symptoms, which plants they are most likely to affect and how to prevent their damage and spread to other cultivars. Remember however, that the greatest defence against disease related decay is vigilance and consistent maintenance; no matter how conspicuous the symptoms are they can only be seen if you are there regularly to see, and subsequently treat them.

One of the most unpleasant afflictions discussed here, Fire blight fortunately only affects a select few of the Rosaceae family, such as Apples, Pears, flowering Quince (Chaenomeles), June Berry (Amelanchier) and Firethorn (Pyracantha), but those it does affect will certainly feel it. The disease is known to wilt and kill the flowers of these plants at the beginning of summer which luckily makes it very easy to notice. In wet weather these plants may exude a thin, milky substance from wounds cause by the affliction, in the case of plum, pear and apple trees the outer bark will appear a tawny brown as the infection rots in the inner bark while it spreads. Ironically, one of the most effective methods for controlling Fire blight is fire itself, trim affected limbs and burn immediately to prevent spreading. 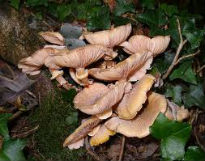 Honey Fungus is a subterranean fungus that works by attacking the root systems of many woody and perennial plants; it will then proceed to decay the wood and bark of these species themselves. The most evident signs of HF affliction is the presence of unusually small or pale foliage, cracking or bleeding of the bark and white fungal growth near the base of the plant, and as can be expected, once the fungus has taken control of the plant’s root system you will notice the death of upper sections of the plant – particularly in hot and dry weather. Plants predominantly susceptible to Honey Fungus include Acers, Birches, Ceanothus, Hydrangeas, Lilacs and Rhododendrons. Unfortunately there is no chemical control for this devastating disease and the only option is to dig the plant up, making sure you remove all the roots, and dispose of it.

As its name would suggest, this affliction is present mainly in species of apple trees, although it has been known to spread to Yew and Oak cultivars. The primary symptom of Canker is the disfiguration that will be evident in the growth, structure and outer bark of the affected plants, causing the branch above the canker to eventually die. Fruits might also rot and fall. This affliction is more prevalent in plants that are grown in heavy, wet soils, so make sure your trees have effective drainage, acidic soils have also been linked to a greater frequency of Cankers, so liming might be necessary. Affected branches should be removed back to healthy green wood and the cut painted with a protective wound paint (available from any garden centre). 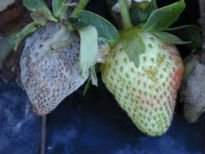 Botrytis cinerea is more famously known for the symptomatic fuzzy grey mould that it produces in affected plants. This mould is only seen on plants in a humid environment and while we get plenty of rain in England we aren’t famous for humidity, apart from perhaps in a greenhouse where you might see it. The dry version of this symptom will be collections of brown spots on the leaves of plants from the Chrysanthemum, Primula and Cyclamen families. Flowers and buds will shrivel and die and soft fruits such as Strawberries, Gooseberries and Grapes can also be affected. The way to avoid it is to make sure that plants are not overcrowded, that greenhouses are properly ventilated and that any dead leaves, buds or flowers are removed promptly.

It should be fairly evident which plants are most vulnerable to this fungal infection and therefore those of you not interested in vegetable growing need not read further, however those of you with a vegetable patch should be vigilant for brown patches in the stems and leaves of your veg. 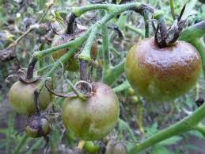 Also watch the fruit of tomato plants, unripe tomatoes will turn prematurely brown while ripe fruit will decay far more rapidly than is normal. Any affected material should be removed and burned, rather than composted, to prevent spread. Earthing up potatoes can help prevent it, as can planting early varieties, which seem less susceptible. Operating a four-yearly rotation in your veg beds to generally help prevent disease.