From Here to Serenity

This week we’ll be departing from domestic gardening conventions to appreciate the traditions of a more exotic vein of horticulture; one whose stylistic boundaries, while not necessarily correlating with European tastes, are still invaluable as a source of inspiration – namely the design, reasoning and aesthetic of the neo-classical Japanese garden.

Traditionally there are three archetypes of the Japanese garden – Karesansui, Tsukiyama and Chaniwa, and while their origins and objectives vary widely, you can be assured of several common elements that unite the trio:

There is the focus on water: whether real or symbolic, water is one of the major elements of a Japanese garden as the ethos is to succumb to nature, and never attempt to implement in your garden something that nature could not itself create.

With that focus comes the presence of symbolism itself. The Japanese often sought to recreate famous landscapes of Japan or China and, to do this, used symbolism combined with the motif of reduced scale i.e. a rock may represent a mountain or a stretch of sand, the ocean.

Attention to detail is key. While western psychology has adopted a compulsion to fill every available space with something physical, the the Karesansui can appear alien to western eyes – it’s emptiness seeming wasteful without the abstract thinking that realised it. 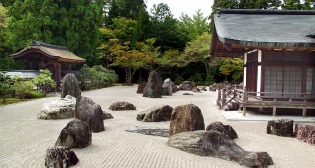 It is the Karesansui that best personifies the Japanese gardening psychology, purely form, rather than function, it serves only to represent something greater than itself, thus it’s English translation “dry landscape garden”.

To us, gravel or sand is utilised primarily as a practical surface for paths or drives, however the sands of the Karesansui are frequently the centre piece for the entire tableau, representing a great body of water or landscape then furnished with miniature islands, mountains or forests.

Hence the popularity of the Bonsai Tree. To attain the authenticity of the Karesansui you could, for example, make  the dwarf conifer Juniperus procumbens ‘Nana’ an addition to your plant list, and there are many other miniature species that mimic their statuesque forest counterparts, so shop around to ensure that your micro forest is in keeping with the rest of the garden’s personality.

The origins of Karesansui are entwined with the practice of temple gardening, the style indigenous to Zen Buddhism and the pursuit of tranquillity through labour. Creating an appropriate atmosphere is an essential step in ensuring the space maintains an air of serenity and detachment from the functional world. Fencing and shrubbery conceal surrounding buildings and other artificial intrusions from view to ensure this. 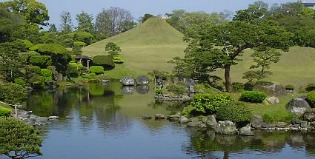 It is within the theme of boundaries and surroundings that Karesansui marries with Tsukiyama, whose most definite role is as the gardener’s diorama. Used to appreciate pre-established scenes within nature, the authentic Tsukiyama is probably the most difficult to recreate as it relies upon naturally grand surroundings or at least a locale that affords vistas worth exploiting. It is with this style that the concept of documenting famous landscapes originated.

By applying careful planning, the objective is to give the illusion of space, so that even the minutest of environments seems grand due to the inclusiveness of its surroundings. Gardens in mountainous areas were known for this, as the mountains themselves were integrated to the space despite existing outside of its boundaries. It is essential therefore to consider your environment before embarking on a Tsukiyama project as it’s fundamental principle depends on creating an image greater than the space allows. It is designed to heighten appreciation for that which nature has already created, an ornament rather than the whole Christmas tree. 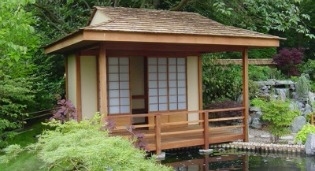 Finally the Chaniwa garden. This style departs from the artistic imbalance between form and function and instead amalgamates the two. The Chaniwa, or “Tea Garden”, originated in a ceremonial capacity as a veritable outdoor chapel. It is here that the water element is most prevalent as these spaces required basins or altars at which guests could purify themselves. It is there also that the resistance to artificiality is muted as pavilions and lanterns devoted to the ceremonies are not only encouraged, but form one of the key institutions of the Tea Garden.

Other common conventions include an island surrounded by a pond, designated for the pavilion and also designed to be viewed from the water itself and as a vantage point from which to observe the rest of space. Stepping stones and bridges therefore are also common to this design as a necessity to make a convenient  transit between the separate areas. Stone lanterns may be added to complement the theme.

So if you are thinking of transforming your garden with a Japanese theme, one of the above styles may suit you, whether it’s the form over function mimicry of the wonders of nature, or the calm serenity of a temple garden. If it’s the more sociable atmosphere of a tea garden you’re after you’d better start pavilion shopping!