Gardening Around the World: The Top Ten Gardens to Visit … continued

Continuing on, as promised, from last week’s article which began this title race for, what could be considered ‘the greatest garden design standing’, we now have for you numbers 6-10 of the premier league of horticulture. As with the first section, our aim has been to maintain the standard of excellence set by the likes of Chateau de Versailles, whilst also providing the most eclectic list possible, based on cultural difference and individuality. 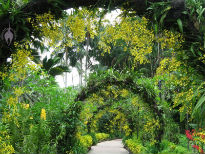 Probably the most high-maintenance project amid our reviews, the Singapore Botanic Gardens, support one of the largest cultured collections of Orchid on the planet. Divided into three sections with each one allocated a different task within a comparatively small area (128 acres), the first of these is known as the ‘Tanglin Core’ and is centred around heritage and entertainment – as epitomised by the presence of many an ancient statue and a seasonal bandstand. The ‘Bukit Timah Core’ specialises in education and recreational activities, however, it is the ‘Centre Core’ that really assumes the jewel in the gardens’ crown. This is where the Orchid beds are situated and continue to house over 60,000 species of the notoriously difficult to cultivate flower.

Originally built as a decorative piece to accompany Emperor Frederick the Great of Prussia’s palace in Postdam, Sanssouci Park is considered one of Versailles great rivals in the European horticultural arena. Whilst it cannot compete either in terms of size, nor grandeur, Sanssouci’s grounds are no less ornate.  After the palace was completed, and its immediate grounds terraced and planted, sights were set on the park which was converted into a baroque flower garden complete with lawns, flowers and hedgerows.

Easily the most recognisable site on our list, the Taj Mahal Gardens were a technical miracle of their time, employing the Mughal garden style which was the standard of its locale. There is a central column of water that stretches from the tomb to the plinth, however, the construction is so precise as to reflect the palace across the surface of the water. The aforementioned Mughal style bears some resemblance to its European counter parts with the strict discipline of geometry that it adheres to, particularly where the shapes and dimensions of its numerous flower beds are concerned. 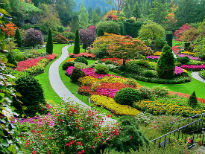 The site of Butchart began its life as a commercial quarry near the turn of the century, but once the limestone had been exhausted, the owner of Portland Cement’s wife transformed the pit into a huge flower garden with different areas devoted to different disciplines. Today the gardens’ 22 acres and some 700 varying species attract a cool million visitors per year. However, these figures cannot be attributed solely to the horticulture, but also to the majestic light displays that occur that far north of Kansas.

Sigiriya could be argued to be the oldest surviving garden on earth, with some historians dating its construction as early as the fifth century A.D. and as such has long held the title of a World Heritage Site, with impunity to future development or demolition. Aside from the breathtaking scope, rich and lengthy heritage, or the history that one of many tour guide will be happy to impart, Sigiriya also boasts some of the most beautiful sculpture work of the last two thousand years. Gigantic animals paws straddle either side of a majestic stone stairway, each only comprising three digits, a fact that only heightens the mysterious ‘lost world’ quality that your surroundings will evoke. 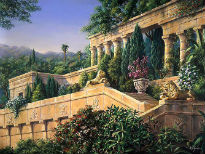 Obviously we couldn’t really include this garden on our list as it is no longer possible to visit, however, being the only one to have the title of World Wonder, it does deserve at least an honourable mention. Estimated to have been constructed around 590 BC, the gardens were an on-going project of the city state of Babylon, reported to have employed what were then futuristic irrigation methods that by modern calculation would have required a minimum of 8000 gallons a day to maintain. King Nebuchadnezzar II was also purported to have used leviathan slabs of stone as the gardens foundation to prevent the water from eroding the ground.

And so ends our list of the Top 10 Gardens to visit, if this piece should impart anything it is this: horticulture is a practice as old as the plants themselves, and such a wide expanse of our history and our relationship to nature should be treated with the same respect as any art form, and sought out just as rigorously.