As gardening is such a global pursuit, it is important that those of us who hold an interest in horticulture should be encouraged to pursue the purveyors of the craft’s excellence – and to the ends of the earth if possible!  With summer holidays approaching, we now have an opportunity to tailor any excursions we might be planning in order to realise this goal. So, we’ve compiled a list below, which in our opinion, best reflects the champions of green fingery around the world, based on the qualities of aesthetics, ambition, innovation and technique.

Although our list may be different from yours, and yours from aunty Jane’s, we’ve tried to include the widest possible range of disciplines and cultures that best reflect the multinational art form that is gardening.

So in no particular order… 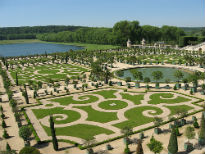 Topping more or less every list going and the last word in French formal gardening, which prizes order over natural formation, and pristine and exacting symmetry, is the prodigal designer Andre Le Notre’s masterpiece. Designed and constructed during the reign of King Louis XIV and unique for its use of foundations which litter the 800 acre site and whose original hydraulics are still in use today.

It’s no secret that I’m a sucker for the Japanese garden style, but this bias by no means detracts from the majesty and grandeur that is the Katsura royal garden, designed over five hundred years ago by the then prince Toshhihito, with the aid of a tea master-come-horticulturalist. It is the most famous and thorough representation of the Japanese water garden and has been asserted as the most complete example of the country’s culture anywhere.

The Villa Lante is probably Italy’s foremost example of renaissance gardening. Construction began around 1566 under the direction of Jacopo Barozzi da Vignola and was later improved upon by Tommaso Ghinucci who oversaw the design of the gardens’ renowned fountains and water grottos. Another famous aspect of the garden is the progressively descending plateaus of water, serving as a fluid stairway, and it is for this reason that Ghinucci’s involvement was so paramount, as without his engineering expertise, the fluid perfection of the fountains could not be achieved. 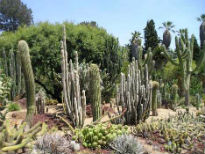 Henry Huntington procured the San Marino ranch at the turn of the century and successfully converted the land into a kind of a gallery of different garden designs, including a famous section devoted to lily ponds. It houses over 14,000 species of plants and its desert area is home to the largest collection of Aloe outside of its endemic Africa. Other themes covered in the garden are European formality and Japanese minimalism. 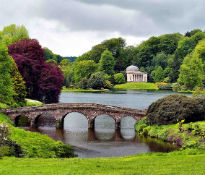 Made famous by the 2005 adaptation of Pride and Prejudice, Stourhead really is a relic of English tradition. Originally established in the 18th century, it is also one of the largest sites on our list at over 1000 hectares. It houses its own village, Palladian Mansion and forest. The real beauty of this place stems from its inspiration – as the scenes there depict, its designer took much from the pastoral poetry and art that was popular at the time and tried to evoke those themes by erecting circular temples and naming features of the garden for characters from the Greek tradition.

Tune in next week for more inspirational gardens from around the world!