Gardens Through the Ages

As a pursuit, gardening is built as much on our own foresight as it is on our creativity. It is important to reflect on the schools of thought that drove previous horticulturalists, because, as influential as the great painters and film makers are on our artistic heritage, so of course must be the gardeners that came before you and I. So we’ll use this article to pay some gratitude to, and hopefully learn the motivations behind, the green spaces of the past and how these reflect on those of the future.

The genesis of artistic horticulture began with one of the oldest recorded civilizations, in the Persian Empire – at its height over 3000 years ago. Gardens emerged as an organic rebuttal to the harshness of the Iranian landscape and also as a testament to the ingenuity of contemporary engineering.

It was the introduction of structures now referred to as ‘qanats’ which made the impossible ideal of Persian design a reality. These subterranean aqueducts were originally developed as a means to combat the hostility of the surrounding desert, make plausible the mass integration of agriculture, and the water supply. The Persian garden is famous for its contrast with the landscapes in which it survived – while the renaissance horticulturalists sought to form uniformity among that which nature already provided, the eastern garden is characterised by its ambition in the face of adversity, perhaps personified by the persistence of the legends of the gardens of Babylon.

So emotive was this school of design, that its thematic sensibility travelled as far west as the Iberian peninsula (modern day Spain and Portugal), where the gardens of the Alhambra are a good example, and as far east as the flat lands of India, where the gardens of the Taj Mahal were laid out in the Persian style. The horticulturalists of both these countries can, like the Persians, be considered geographical victim to, and conqueror of, the arid landscape.

Despite the predating Egyptian, Roman and Hellenic empires, none had before employed gardens with such frivolity and with so great a gulf between the priorities of art and state. 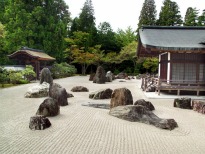 The next chronological mile-stone in horticulture comes from, what is now the longest surviving empire of the ancient world, the Chinese principality, beginning with the Qin dynasty approximately 200 BC. These projects were usually state sponsored and were often established as a form of a homage to the current imperial patriarch, the Qin dynasty, however, they took a back seat in the progression of Chinese scholarly gardening to the Yin Yang philosophy that dominated the countries academia in later centuries. The impetus stemmed from a focus on the importance of harmony and balance within, and in relation to natural setting, hence the design ideal that spread to medieval Japan, which I have mentioned in a previous editorial.

Thus began the idea of microcosmic recreations of the natural landscapes of both countries, the obsession with symbolism to evoke greater scope than would be possible in the dimensions of a conventional garden, and also the inclusion of panoramic perspective to give the illusion of size. These included the use of gravel pits to signify oceans or deserts, which themselves were identified by the deliberate inclusion of rock formations to represent land masses or landmarks within these miniature environments.

Following the fragmentation of the Roman Empire, two major powers emerged in Eurasia from the remains of the old imperial senate – the Western Roman Empire fell to ruin against the hordes of Attila, while the eastern remnant would later evolve into the Byzantine Empire. The vast majority of their horticultural heritage, however, was lost with the sack of Constantinople by the Ottoman Empire and, while contemporary novels provide romanticised accounts of the techniques employed, the only solid evidence we can rely on is the context around which they were constructed, which dictated all those that came before. Due to the relative youth of orthodox Christianity, the integration of animal sculpture to the Byzantine garden was not an unreasonable concept – having not fully established the accepted religion, pagan idolatry was still rife and thus nature, as opposed to divinity, was held in much higher regard – unlike the monastic gardens that were to follow. It is reasonable to accept that these motivations continued until the demise of the empire in 1453, which leads conveniently into the subject of renaissance gardening. 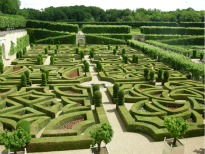 Despite the stimulus of its predecessors, and the relative contrast between countries and the respective art movements in other mediums, renaissance gardeners had one common ideal: uniformity. The beginning of the renaissance and the introduction of formalised aristocracy, following the bloody medieval period, led to a new focus on regality and aesthetic symmetry, and brought with it a boom in the popularity of topiary. Hedging had become a geometric means of maintaining the lines and shape of beds and gardens and also in promoting the favoured colour of the era, which was green. Many royal and state gardens were designed with a bird’s eye perspective, in that the formation and shaping of hedges and beds were intended to be seen from above, which meant that, while the garden was aesthetically pleasing, it was not an interactive experience, but one whose primary function was to be observed – and observed from a distance. Excellent examples of such gardens can still be seen at Versailles and Villandry in France.

With the introduction of the Romantic Movement in the 18th century, came a particularly English focus on the revival of the pastoral imagery that over the past few centuries had become so popular in continental art.  The realisation of an idyllic landscape, including lakes, trees and temples, became as much a part of the fabric of horticulture as it had of contemporary literature and painting – hence the favoured integration of livestock such as sheep and horses to the garden grew exponentially! Lancelot ‘Capability’ Brown was not the first designer to employ this style, but he was perhaps the most famous, designing 170 gardens including Petworth in West Sussex, Chatsworth in Derbyshire and Blenheim Palace in Oxfordshire. 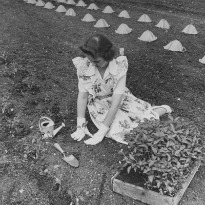 By the end of the romantic era, however, the class division in the country had grown to dizzying heights due to the effect of the industrial revolution, which was only further exacerbated by the First World War breaking out. Due to the pressures that global conflict produced, gardens were forced to evolve once more to be used for more practical purposes and, by the time World War Two hit, the working class was fully indoctrinated with the ‘grow your own’ mentality. It became not only a personal responsibility but a national duty to ‘dig for victory’  to ensure that, should the worst occur, one  would be ready to contribute to the cause of king and country, and thus vegetable gardens became the new standard.

Once the wars were over, however, and the economy benefited from the rule of a new and industrious government, sustainable consumption was no longer a priority for the common man, and so English culture underwent a second renaissance and what emerged were the many and varied children of a hundred older gardening cultures that we see today – but no less beautiful for it.

Finally, we must address the garden design of tomorrow which, in the wake of the 19th century industrial boom, can be summarised in one word: Ecology. As we’ll be covering in another topic this week, it has become the primary focus of both government, and leading designers to ensure that our domestic gardens, as well public green spaces, are as sustainable as possible so that they, at least, may shine brightly in the shadow of our uncertain future.

Tulipmania
Where The Wild Things Aren’t