Continuing the theme of the importance of sustainable gardens, here we will discuss what are known as ‘Green Roofs’, the different types available and why they’ve become such an integral part of modern horticultural planning.

As one can ascertain from the name, the basic premise of a Green Roof is to bring plant matter, and therefore greenery, to our otherwise barren rooftops and thereby take best advantage of the dead spaces in and around our gardens, in order to better support our fast degrading environment.

Due to the nature of photosynthesis, Green Roofs are characteristically easy to establish and maintain because, by their very design, they are in the optimum position for the reception of sunlight and rainwater. The concept is not new – ancient dwellings often used turf as a roofing material, but, in modern times, the Green Roof concept has once again been implemented in many commercial and architectural sectors, not to mention the broad following it has in the residential market. Rolls-Royce’s factory in West Sussex has one of the largest, commercial green roofs in Europe, covering over 32,000m2, and the green roofing project at the Ethelred Estate in London is another good example of the concept being taken more seriously.

The ecological ramifications of projects like these are self-explanatory, more green biomass equates to an increase in the conversion of CO2 to oxygen through photosynthesis, not to mention the purification of air borne moisture that comes into contact with the site. However, there are also great financial gains to made, which are probably best exemplified by the US Postal Distribution building in New York City which saves over $30,000 a year in heating and cooling. The project itself is designed to sustain itself for 50 years which suggests a total of $1,500,000!

However, we’re getting ahead of ourselves – very few of us have the space and resources to oversee a project of such scale but, lest we forget, this is effectively an act of charity toward mother nature, and all charity begins at home.

Before you embark on a Green Roof project, it is imperative you check whether you’ll require planning permission to do so, and what regulation you’ll have to abide by. However, it is unlikely that you’ll be bound by many restrictions, as the state encourages their ecological benefits, particularly the green corridor it will provide for local wildlife. Regulations aside, the Green Roof’s domestic application are copious, including a cheap and sustainable form of insulation and greater control over storm water runoff. Research by the Centre for Sustainable Development at the University of Cambridge has found that “a layer of vegetation can reduce heat loss from buildings, cutting the wind chill factor by 75% and heating demand by 25%”, and the variety of plants you can grow are many – providing colourful coverings for otherwise boring plain, or ugly roofs.

There are three categories of roof garden and they are; extensive, semi-extensive and intensive, which are defined primarily by the depth requirement of their soil, thus dictating which plants are suited to each. 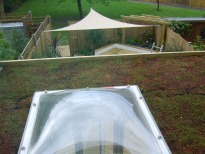 Extensive catergory green roofs are characterised by their primarily artificial soil combinations that normally integrate materials such as perlite, rockwall, sand and concrete and, as such, they are best designated to drought resistant plants that are in need of good drainage rather than regular moisture. The planting medium is ordinarily supplemented by a filter layer, drainage layer, root barrier membrane and insulation and waterproofing respectively. Readymade Sedum mats enriched with substrate are a good choice for this environment. The planting medium itself should be no fewer than 2 inches deep. 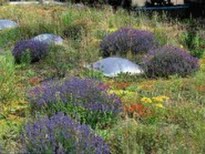 The semi-extensive project needs a slightly deeper growing field (4-8 inches) as it should be able to support small perennial plants, though not the beds, trees and shrubs of the intensive green roof. Good plants to try here would be Knautia macedonica, Centaurea scabiosa and Origanum vulgare. As with the extensive roof, you will require all the standard drainage and waterproofing faculties that underpin the soil structure. A semi-extensive roof can take anywhere between twelve and eighteen months to establish and will require regular maintenance, particularly if it is situated at an unorthodox angle or position in relation to the sun. Regular weeding, watering and feeding are all a must, and even then you might find some areas may fail.

An intensive Green Roof is that type which is most reminiscent of orthodox gardening, as it is often structured around three dimensions, including raised beds and box crops, and with a much wider range of suitable plants. However, these can only be supported by a richly organic growing medium and plenty of depth to become established – usually around 12 inches. It is important when constructing these raised beds that you use lightweight materials to ensure that the roof itself can support them.  There are many other tricks that can be utilised to reduce the weight of the roof garden, such as the bulking out of compost with perlite, and using polystyrene rather than broken pots to crock the bottom of planters being used. However, as we know, the lighter the compost the less sturdy it acts as a plant anchor and pots and planters can easily fall over, but you can overcome this issue with clever placement of plant supports, such as wires and staking.

Floral and Hardy are experts in this field so, if you would like to turn your unused flat roof into a colourful alpine meadow, or an exotic Mediterranean-style vista, or you just want your own Hobbit house, just get in touch!

No School like the New School
Seclusion v Segregation