With the summer now becoming a point of reflection in our minds, it has become apparent that one of the major complaints – aside from the indifferent weather – has been that of hay fever, which seemingly even more so than in previous years, has been particularly acute. Having several friends and family members who are afflicted by this nuisance, I’d like to focus on suggestions for potential defences against it, in preparation for next year’s bout. 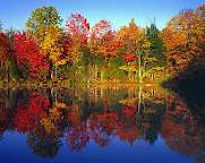 Autumn appears the perfect time to make these suggestions, as it is during this period that the planning stages of next year’s garden generally take place, and more specifically the selection of which plants will be grown and sown. It is no mystery that some genus are more antagonistic to those suffering from hay fever and so we will focus here on species that are least likely to exacerbate the itchy eyes and runny noses, with which the suffering has become associated.

As it happens we’re not original in this intent – why only this year at the Chelsea Flower Show there was an entrant whose primary design feature was its accommodation of hay fever. The designer in question, Olivia Kirk of KKE Architects, suggests one of the major proponents of hay fever is the presence of air-dispersed pollen:

“If it’s wind pollinated, the pollen is designed to be buoyant and it stays in the air a lot longer, but with insect-pollinated flowers, when the insect has done its job, the pollen is heavy and falls to the ground.” 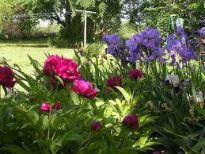 In response to this, Kirk suggested the use of Irises and Peonies, whose pollination is reliant on insect intervention and as such can still provide a garden with colour and character, without offending the fevered. Of course, the insect rule is not universal – in particularly high winds the pollen is still liable to irritate and as such it is recommended you favour close-cupped flowers, which literally require the infiltration of insects to extract the pollen and will thus be less affected by the passive powers of wind.

Another of Kirk’s rules of thumb was the avoidance of grasses wherever possible, as these are known for producing some of the most allergenic pollens, and their increased propagation made possible by this summer’s erratic weather has contributed to the lengthy hay fever season we’ve experienced. 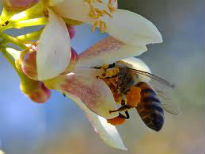 However, many of us favour a more varied planting style than simple flowering plants and so it’s important to note that, while insect pollinated trees and shrubs are few and far between, they do exist. The important distinction to make is between trees that are primarily foliage-based and those that flower, as these flowers are a signal to potential pollinators, whereas foliage based trees are majorly populated by seed pods produced to be dispersed by the wind.

There are also a variety of crop plants, many of which can be grown on a domestic scale, solely pollinated by bees, whose presence provides a double benefit, in that you’ll also be supporting this essential cog in our ecosystem. These include, but are by no means limited to, Okra, Celery, Cauliflower, Coriander, Quince, Fennel and Strawberries. 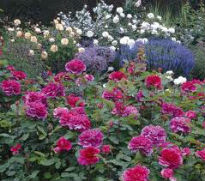 Good ornamental plants to use include Amelanchier, Hebe, Choisya, Hydrangea, Roses and Lavender, whereas ones to avoid would be Birch, Oak, Lime and Sweet Chestnut

As a general rule daisy-type flowers such as Chrysanthemums, Sunflowers and Asters should also be avoided.

Finally, perhaps the most simple and universal piece of advice I can impart, is to stick to the females of any species you select if available, and particularly in the case of flowering plants, as it is very rarely that the female of a genus will produce the pollen necessary for procreation.

Hopefully this list, and the subsequent action it should encourage, will ensure you can enjoy your garden in some modicum of relaxation come next spring – safe in the knowledge that, if the weather holds, your eyes should remain decidedly dry.