A Wet Day in Wonderland

The events of last week were paramount on any gardener’s calendar as they marked the beginning of the Hampton Court Palace flower show and thus the world’s largest exhibition of designers, horticulturists and artists whose palette always began with the colour green. As such, I was dispatched last Friday to ascertain the inspiration behind this year’s themes, motifs and designs and also to assert my own opinion on which were most successful. 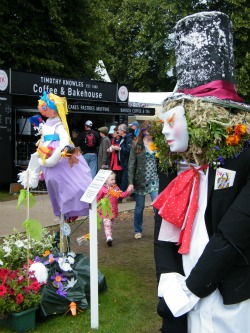 After a tumultuous, chaotic bus journey from Richmond I found myself at the gates of the palace, by midday already teeming with visitors. Having entered the show ground, I came to the poets’ gardens first, which were to set the standard for the rest of the day. There, six English scholars were paid homage and none more so than Lewis Carroll as, in an attempt to increase the marketability of gardening to children, the RHS held a competition to see which primary school could assemble the best Scarecrow. However, these field guards had to be renderings of the characters of Alice in Wonderland, thus encouraging an interest in classical literature whilst providing a constructive outlet to the participants of the competition. 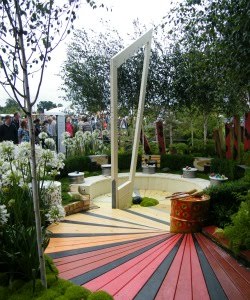 Unfortunately the Carroll garden itself seemed somewhat less focused in its objective. Its construction appeared erratic and convoluted, unable to settle on a specific colour or material, the design including metal, woodwork, mirror and musical instruments. And while its synopsis suggested a therapeutic space in which troubled youngsters could rehabilitate (with the aid of musical stimulation), it lacked any real relevance to Carroll’s Jabberwock, from which it was supposedly drawn. 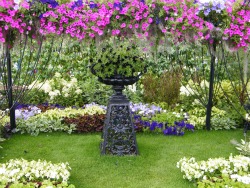 The next exhibit of interest was an ode to Byron’s love poem ‘Love’s Last Adieu’, a fairly claustrophobic space I found, though this was to its credit. A wildly colourful outer sanctum supported by iron trellis and festooned with hanging baskets enclosed and shaded an urn fill with black blooms. The effect was decidedly morbid, however well constructed and I heard one show goer liken Ms. Mathews and the Co-operatives contribution to a mausoleum. 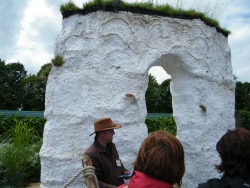 Next I spoke to designer Barry Chambers concerning his garden entitled ‘On the Sea’ and the steps from initial inspiration provided by Keats’ eponymous poem. As the photo shows, it was an extremely impressive project whose ambitions included a 2 metre high artificial cliff face, which, in interview, Mr. Chambers revealed had been purpose sculpted from plaster and wire framing to emulate the setting of Keats’ piece. However, the real ingenuity came from the subtler elements of the space as Barry revealed to me the purpose of his use of mirrors, wanting to widen the space visually if not physically, he aligned two mirrors to represent the sea’s horizon, complemented by an azure backing panel.

My final look at the poets’ gardens, and my fondest, came from Jayne Thomas’ rendering of Percy Shelley’s ‘Mont Blanc’ and was named as such. I learned in a brief interview how Jayne had moved from ‘Mont Blanc’ the poem to the spectacular physicality she’d constructed. 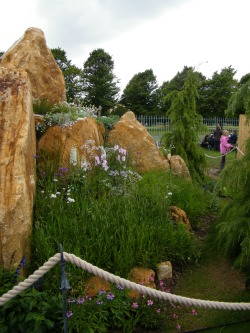 “The Poem for me was about how Shelley saw and challenged the powers of creation… the raw, elemental power of nature and yet he saw the beauty…. I had a lot of resonance with the poem and for me, I went on a hike and came up with this lovely pattern of the Witches knot and I saw for myself that you could have a big, raw stone formation and then make it pretty.”

And lucky I was to secure her time as she revealed how busy she’d become in the months leading up to the flower show, and just how costly and rewarding her ambition had been.

“The rocks weigh in at nearly forty tons and I had those masoned to order… I’ve built this kind of rock jig saw… it’s planted on three sides, with soft palliative colours so none of them clash and I’m very happy with the planting… I’ve had a lot of orders for elements of the garden, it appeals on the hard rock side to men and on the planting side to women, so it’s like a happy marriage. People can have the strong elements with the pretty planting.” 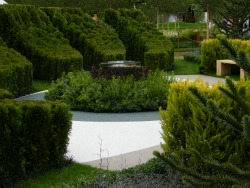 After a quick lunch I swung over the Palace gardens’ dividing bridge to check out the show gardens and found myself at first derisory, and then thrilled by my own lack of insight and the ingenuity of one Judith Cornford. Having no prior experience with figurative architecture, I immediately took her project ‘Eye of the Internet Maze’ at face value, a rather bland picture of the iconic eye of Big Brother. How wrong my interpretation was! After catching Judith, she passionately explained to me her reasoning and the clever minutiae that formed her project that I would have otherwise missed. The term ‘maze’ comes from her own experiences of discomfort and claustrophobia of the seemingly inescapable and simultaneously inaccessible digital playground. 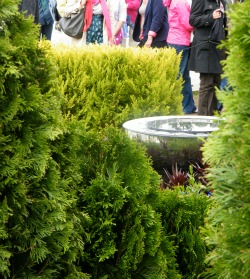 Touring the rear of the garden she explained how the font at its centre represented the fountain of information that remained illusive to those who are unfamiliar with its interface, and how this confusion is realised by the hedgerow pathway at whose entrance it is impossible to face the font directly.  Furthermore, a garland surrounds the water feature as a gift to the perseverance of those who make it there. So my initial observation was shattered and I really had to stand in awe of Cornford’s attention to detail, more of which remains to be said. 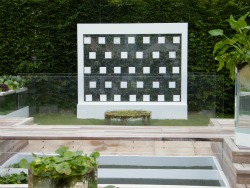 Now, the ‘Naked Garden’ was a project about which I’d seen a lot of coverage, but I wasn’t sure what to make of it. The impetus of this project, it seemed, was to expose the features of a plant that would be generally concealed. The method admittedly was ambitious, the use of large scale hydroponics in a show garden, however it seemed ill advised as this meant that the artificiality of the garden became unavoidable. One could see the pipes and irrigation systems that sustained the plants and the focus on synthetic symmetry was likewise undermined by the chaotic nature of plants themselves, whose shape abided no formula and whose murky waters seemed not in keeping with the clinical nature of the architecture which was all polished glass and ceramic. 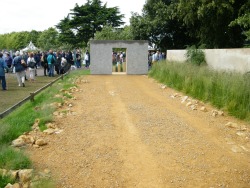 Let’s talk concept. Seeming at first out of place in Hampton Courts riot of colour I stumbled across the barren plains of ‘Enduring Freedom?’ – a design by Nete Hoijlun and Corinne Sharp that focuses on the ongoing conflict in Afghanistan. Nete explained to me that the nature of her motivation behind this project stemmed from her own son’s involvement in the war, due to conscription in her native Netherlands. Picture, if you will, a series of pillars of varying height, a dry beige wall dominates the foreground behind, and beyond that, desert. Along one side lies a poppy field. And thus the metaphor begins, each of the pillars represents the casualty number of a specific year in the conflict, and their height is respective to that number. You have the safety of statistics on one side of the wall, the danger of the battleground on the other, punctuated succinctly by the soldiers themselves, represented by the iconic poppy flower. But it goes deeper, for we can’t forget the heroin trade that fuels the Afghan army, buys their munitions, thus poppies beget more poppies. 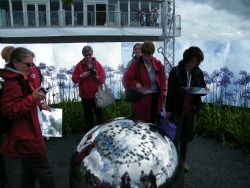 After crossing the Thai quarter and indulging in some of their cracking curry, I came to Anoushka Feiler’s inverted ‘Eden’. Taken from the famous Hendrix jam, ‘Excuse Me While I Kiss the Sky’, it specialises in a similar sort of perception shift that he was known for. As you enter the space you’ll be handed a square of mirror and you’ll notice a whole mess of other mirrors too, curving around the perimeter, one large reflective sphere at the centre. You’ll look around a little confused, then up and then down. A network of hanging pots comprises the upside down garden, I was fortunate that the weather picked up as I entered and I was able to appreciate her vision fully, the sky has become the lawn and the lawn has become insignificant. The whole area pays homage to the infinitely more vast space above it and thus the garden itself is enlarged.

All in all, a superb garden and a superb show, follow this blog for the coming debate, ‘Practicality vs Aesthetic’ – does the show garden have a life beyond the exhibition?