What makes the perfect house-guest? One who doesn’t leave a mess, doesn’t make a huge racket in the middle of the night and always brings wine? Well, I’ve yet to find an alcoholic Gardenia but on the other two counts, a beautiful houseplant delivers like no person can and, alongside these characteristics, they go a long way to brightening the place up.

So, I’ve compiled two lists, the first of which you’ll find here, outlining a few of what we think are the best indoor plants. The initial five have been selected based on the quality of their flowering, while the subsequent follow up will focus on plants whose foliage is what sets them apart.

Probably the most obvious entry to the running and foremost among houseplants for their longevity and beauty, Orchids are the single largest group of plants in the world boasting over 30,000 original species and a countless number of hybrids which, due to their popularity, is growing all the time. In fact you’d be hard pressed to find a major flower show or exhibition that didn’t feature a variety of Orchid as one of its major successes.

Unfortunately, there is a reason the Orchid is so popular among the professionals, as it can take near-professional expertise and commitment to ensure that they grow healthily and maintain a decent life span, but if you satisfy its requirements for good light (but not direct sunlight) and moisture at the right time, it will give you flowers over many months. One of the major killers of house variety Orchids is over watering, due to their prominent root structure it can be difficult to gauge the water level in the soil by eye, and my advice is that if it is moist to the touch then watering is not yet required. 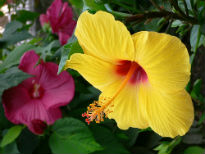 Hibiscus have developed a world-renowned association with the exotic cultures of the tropics, and particularly for their function in Hawaiian traditional Rei’s (the flowered necklaces worn by hula dancers), but this can also mean that potential growers in colder climes do so with some difficulty. There are hardy Hibiscus shrubs we can grow in the UK in the garden, but as a tropical plant the Hibiscus rosa sinensis can be highly temperamental, requiring consistent heat, light and humidity to grow healthily whilst also being susceptible to a variety of insect damage.

However, with every cloud there is a silver petal, the Hibiscus is also one of the most eclectic flowers on earth – available in single or double forms and in practically any colouring you can imagine, some of the more renowned hybrids feature multiple colourations on a single petal! So if you have the moxy to force this beauty into being, rest assured your hard work will be repaid. Grow it on a warm window sill but don’t let any draughts near it and place the pot on a tray of gravel which is kept watered to provide humidity. Water it regularly and keep the soil moist, but don’t let it stand in water for any length of time.

This species of flowering plant may be more familiar to us as the common pineapple which happens to be one of this cultivar’s many varieties. The Bromeliad is also oft referred to as the ‘Urn Plant’ due to the cupped shape that its rosettes assume. The long, strapped leaves will grow up to eighteen inches tall and will enclose the tall, intertwined stems of the colourful central blooms, and the spiked foliage itself will take on a leathery, dark green appearance.

Unfortunately, due to their exotic appearance, the Bromeliads had for a long time earned a reputation for difficult cultivation, however, contrary to this belief, they can be easily adapted to indoor temperate environments. Just give them a bright window sill in a warm room, although not in direct sunlight, and water only when the soil surface feels dry. Spray the leaves daily with tepid water as they absorb moisture through their foliage. Sadly, the plants will die once they have flowered, but each flower last many months and the plant will also produce offsets which can be potted up to form new plants.

The African Violet is among the most popular flowering house plant in the UK, partly due to its varied and attractive appearance, but also due to the nature of their growth pattern. They are a compact and free flowering plant and because of this, and with due diligence, it is possible to encourage multiple blooming periods per season. In fact, with mastery of this plant’s needs, it is not unheard of for them to be able maintain continuous flowering, and they’re not just ‘violet’ either – they come in a range of beautiful colours.

They just need a little sunlight each day, so an East or West facing windowsill is best, and prefer to be a little cooler than some of the others on our list so don’t put them above a radiator. Take care when watering not to wet the leaves or flowers as this will cause rot and only water when the soil is dry – more African Violets die from over watering than anything else. If you can use rainwater then so much the better, as they really don’t like hard tap water. Pinch out the faded flowers and it will keep flowering for you forever! 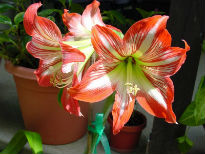 Amaryllis, and more specifically Amaryllis belladonna, is a flowering bulb native to South Africa whose tall stems will bear large, vibrant, almost over-the-top flowers and will perform equally well either in a summer flower bed, or potted for indoors, hence its inclusion here. Commonly bought as Christmas presents, their flowers are extremely long lived, typically blooming from winter to early summer and showing predominantly in the red side of the colour spectrum – everything from white to pink to scarlet, and many of them bi-coloured.

Many people just throw them away after the flowers die, but the marvellous feature of this plant is that once its first flowering season has ended the bulbs can be recycled, providing you with flowers for the next year. When each flower fades simply remove it from the stem and, when they’ve all gone, cut the stem down to a couple of inches above the bulb. Put the pot outside for the summer, keep watering it as you would any other plant and, in autumn, before the first frosts, take off the leaves, bring the pots in and put them somewhere in the dark for about six weeks and don’t water them. This will force the plant into a dormant state. After this time bring them out onto a sunny windowsill and the growth cycle will start all over again!

Handsome Hydrangeas
Take it to the Bank