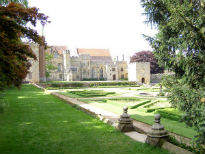 This title refers to the hardworking topiary specialists at Penshurst Place, a formal garden located some thirty miles south of London. It is celebrating a very noble anniversary, as 2012 marks the twentieth year that Penshurst Place has contributed to the war on cancer, through some, arguably, unconventional methods. Since 1993 the site has been providing clippings from its giant Yew hedgerows, from which can be extracted Taxane – a chemical essential to the treatment of certain types of cancer.

Every year they have harvested over four tonnes of clippings to then be shipped to cancer treatment labs across the globe. Taxane works by halting mitosis (the division of cells) and thereby effectively halting cell growth, in turn inhibiting the spread of certain cancer cells, particularly those virulent in lung, ovarian, breast and neck cancer.

However, the really admirable element of all this is that the gardeners have only a ten week period in which the vital compound is active to complete their task.

‘Every year we have two gardeners working full time on clipping the hedges, which takes five to six weeks in the late summer and early autumn. The yew hedging is a mile long, but because our gardeners have to trim the plants from all sides, they actually cut three miles of hedging. As a result, we normally generate around four tonnes of yew clippings in a season.’

Quite a monumental task for two people to complete, however, labours like these give testament to the potential value of determined horticulture. There’s a long history of plant material being used in medicine and it’s good to see that horticulture still has much to offer in this regard.

Wondrous Wetlands
Gardens for the Mind