The majority of us are familiar with at least some aspects of English history and one of the topics our teachers, mine at least, seemed to love instilling was the Tudor period and particularly the reign of Henry the Eighth, whose marital frequency has become an almost blackly comical subject among history students across the country. However, what many of us may be unfamiliar with is the legacy of this period, and the heritage it has afforded us today. Fine examples of such heritage are the various castles and country estates that exist as a result of these figures in history and I was fortunate enough to visit one of them, Hever Castle, a couple of weeks ago, and to enjoy not only the magnificent house, but also the magnificent grounds they keep there. 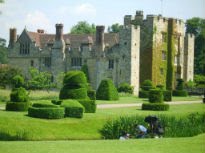 However, the gardens whose praises I wish to sing are only a recent addition to this microcosm of English history, having been commissioned and built between 1904 – 1908 surrounding the 13th century manor house-come-castle. Hever, the manor house, began as the seat of the Bullen family, later known as Boleyn, and not only was the home of Ann Boleyn, Henry’s second wife, but also was subsequently to serve as a form of dower for the later queens of Henry VIII, being used by Anne of Cleves, following the death of its former mistress in 1536. 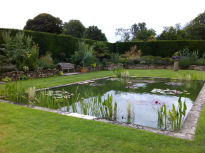 The design of Hever’s gardens and grounds is immediately arresting for its formality and the blatant influence it has taken from the popular court gardens of the renaissance and romantic era, and one of its most impressive areas is the aptly named Italian Garden, which was commissioned by the then owner, William Waldorf Astor, as a kind of outdoor gallery for his vast collection of Italian sculptures. There is also within this space a tranquil sunken garden with pond and colourful planting.

In truth, the garden was designed with an eye toward the future and its 125 acres are only now coming to full maturity. New areas are also being opened up to the public, including a fun water maze for children on Sixteen Acre Island. 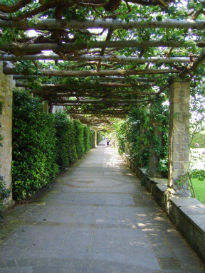 For a more direct look into the past, however, one can enjoy the Ann Boleyn walk which, after passing through the stunning Rhododendron garden, will give you a literal picture gallery of plants from the late Queen’s era – many being hundreds of years old. The gloriously scented walled Rose garden houses over 4,000 different species of the eponymous flower and, walking through the stunning Loggia with all its overhanging climbing plants, one could almost imagine courting couples of the time taking the air together (a vision made easier by the fact that there was by chance a jousting tournament on that day with many people in period costume!) 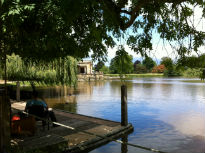 However, for me, the crowning glory of Hever’s outdoors lie at the end of this call-back to Italian heritage, a huge 38 acre lake which, when I visited at least, was complete with a jetty and series of row boats for tourists to enjoy the full grandeur of the waters and the sheer scale of the grounds as a whole. 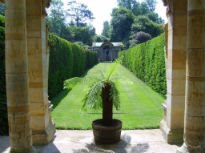 It really is an opus of a project when one considers that all the grounds there pre-twentieth century were little more than a large bog, glorified only by those who’d already died long ago. Unfortunately, due to the adverse weather we’ve been having, I was unable to visit the famous garden mazes of Hever, which had been degraded in the wind and the rain and thus needed some preservation from the wears of human contact. Maybe next time.

In closing, Hever is indeed a font of English heritage but also a marvellously ambitious show garden in its own right, and anyone with a serious interest in large scale horticulture would do well to pay it a visit.