Today we have a list of silver tinted cultivars to brighten your borders.

A quick word on the colour silver – while you won’t achieve a mirror effect no matter how diligent your maintenance routine is, you can bring a bright, shiny feel to your garden with shimmering silver foliage. It’s interesting to note the time of year these colours can be most effective too. For example, the golden plants we discussed last week might be most effective in the summertime, when the sun lights them naturally and accentuates their colour with its own, while the silvers in this piece might to be said to have their most dramatic effect in spring or wintertime, when the lighting of a cloudy sky matches their tone. 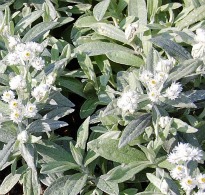 Anaphalis are perennials and while their foliage itself is not strictly silver, the leaves are possessed of a layer of white hair filaments that give it a layered silver sheen. The transient nature of these hairs also affords the colour more depth than if it were merely the base colour on them. This colouring is further augmented by the flowers this cultivar will produce which bloom in small, white clusters. They are resilient to most environments, not having a preference in soil content or acidity and, due to their clump forming habit, they will stand up to a high level of exposure. 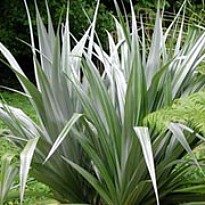 This variety derives its name from the shape of its foliage, which is large, sword-like and dramatic. A clump-forming perennial, this evergreen is also extremely hardy and will continue to show this beautiful greenery, or should I say silverware, throughout the winter. With meticulous care you may also succeed in rearing these plants’ seldom-seen yellow flowers and orange berries. Your best chance of this is an acidic and sandy soil, or even a neutral, loam based environment with minimal exposure and added frost protection, when necessary. 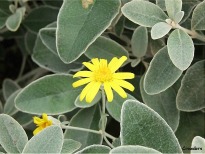 Brachyglottis is an evergreen shrub whose ovate, grey leaves have edges tinged in grey-white, giving an overall silver impression, and throughout summer it will bear vivid yellow, daisy-like flowers. It has a bushy habit and you can expect a spread of up to 1.5m. It is also an extremely adaptable cultivar – it will tolerate anything from clay to sand, acid or alkaline and practically any level of exposure to the elements.

Santolina is a fine-leaved evergreen shrub with aromatic foliage, which in the summer season will bear a mass of yellow, button-like flowers. Its foliage is soft and woolly and finely divided. It also goes by the names ‘Ground Cypress’ and ‘Cotton Lavender’ and, while it will tolerate most soil types and ph. levels, it prefers to be well sunned and equally well sheltered. 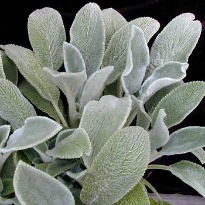 ‘Lamb’s Ears’, as Stachys are otherwise known, are herbaceous perennials that, similar to the Anaphalis, do not actually have silver foliage per se, but rather a thin film of ‘fur’ that, due to its colouration, applies a false hue to the leaves themselves. The leaves will appear in pairs, leading to the plant’s common name, and they will often produce two-lipped, purple-pink flowers in the summer. They prefer a light soil base – sand or chalk – to ensure they receive the drainage necessary to their survival, but they’re hardy and prefer a sunny position.