Hidden Treasure in Your Garden?

Who remembers as children digging in the garden in hope of finding hidden treasure? 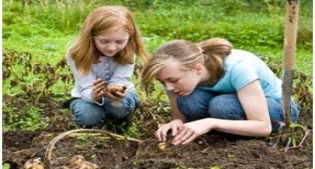 More often than not our discoveries merely consisted of rusty nails and discarded garden paraphernalia, but that never took away the thrill of the search.

Unfortunately as adults the thrill, and even likelihood, of finding anything of value and antiquity in our garden is seldom, but surely the cardinal question has to be: would you actually say anything if you did?  Last month, a woman was the first person in the UK to be prosecuted for failing to report treasure. Yes, we said treasure!

However, this wasn’t the Treasure Island variety involving ancient maps, hostile pirates and inordinate quantities of gold coins; instead she found a 14th Century coin-like object – known as a ‘Piedfort’ – worth £2000 in her back garden.

Although the woman, from Ludlow, took the silver artifact to her local museum back in January 2009 to be identified, she kept hold of the coin up until last month when the police finally came knocking and charged her under ‘Section 8 of the Treasure Act’ (we would love to know the what the other sections include).

After an investigation by West Mercia police, the woman pleaded guilty to the offence of finding an object believed to be ‘treasure’ and not reporting it. She was ordered to hand over the artifact and presented with a conditional discharge and ordered to pay £25 court costs.

“This is a landmark case and it sends a clear message to those who fail to report Treasure,” said Dr Michael Lewis, Deputy Head of the Department Portable Antiquities and Treasure at the British Museum. “This was the first known case of its kind in the country to have resulted in prosecution.”  Well, let this be a clear warning to us all then. It’s easy to rely on the age-old saying of ‘finders, keepers’ but even treasure buried in our very own garden isn’t legally ours. We’re sure a few rusty nails or fork heads don’t count though….

Our garden design team has worked on hundreds of gardens and projects over the years and never found a single bit of treasure! Maybe you’ll be the first? Simply enquire and we’ll start the process of designing your new garden.

June in the Garden
Problem with a Flooded Garden?