How to Look After Your Lawn in Spring

If winter be our great discontent, then spring is the time of great uncertainty and none in recent memory has proved this the case more righteously than the one we’re currently experiencing. So far we’ve seen several late frosts, one of the longest droughts in recorded history and now a somewhat welcome rainy spell. However, what this equates to is a great deal of risk for the delicate areas of gardens, roots can freeze and die, and high winds can destroy those bloomers that the drought fooled us into exposing. However, this week we’re discussing lawns, the basic maintenance tips during such an unruly April, and whether turf really is the better option over seed.

If you’re starting from scratch with a new lawn, there are different types of grass seed and turf, composed of different mixes of varieties. Cool-season grasses include fescue, blue grass and rye, which have two annual growth spurts, the first preliminary spurt in spring and the more noticeable growth in autumn, due to their preference they will suffer in particularly hot summers – such as the one we’ve been promised this year – and so the priority of spring care is preparing them for the difficult months ahead. Warm-season grasses comprise species like Zoysia, St. Augustine and Bermuda, which will hibernate in the winter months and will flourish once the thaw is well over and the hot weather begins, growing consistently from late spring to late summer.

The debate between seeded lawns and turf continues. Seeding is considerably cheaper, however, results can be patchy, and birds, cats and heavy rainfall can all result in seed being dispersed unevenly. Weed control is also a factor, because seeded lawns cannot be planted in conjunction with chemical herbicides and so it makes the weed problem much more strenuous to deal with. However, we must also consider the relative cost in man hours vs. capital when thinking of the softer option of turf. Each obviously has their disadvantages and benefits, but in the end it is up to you decide based on the environment of your garden and also the budget you’ve allocated.

With established lawns, due to the post winter moisture that will have no doubt accumulated in your garden, try to avoid any heavy garden work or even walking on the lawn until it dries out, as weight and hard impact can cause the soil to condense and the grass itself to develop clumps that will be unsightly and interfere with growth. 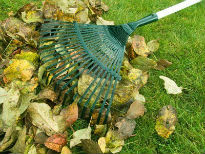 But, once your garden has dried out, it is best to give the lawn a thorough, but gentle, spring clean. Gather leaves and other fallen debris by hand and then carefully rake over to lift those blades of grass stuck together, to make it easier to mow. With the first cut, lift the mower blades a little and then gradually lower them as the season moves on. Try to avoid scalping, as this will encourage moss and weeds. It’s best to leave the clippings on the lawn in spring and summer, as they will feed the growing lawn and keep some moisture in too.

Any bare patches can be re-sown this month. Just lightly fork over the surface to break it up and then firm it down gently before sowing the seed. Don’t forget to water it though!

Feed the lawn with slow–release organic fertiliser now for a greener lawn later, but don’t over feed as this will make it prone to disease. 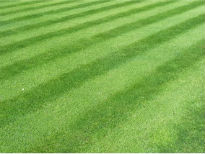