It ain’t rock and roll but I like it

You’ll remember not so long ago our releasing a periodical on the most effective means of building a rockery: content, structure and time frame, etc. Well, this week we thought we’d give you a list of plants best suited to such a garden, based obviously upon their hardiness, beauty and other regular criteria in these top tens of ours. Most, as you would expect, will prefer a sunny, free-draining site.

So without further ado let’s find out more about this group of rockers. 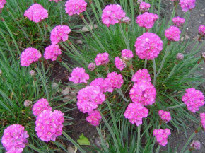 Commonly seen near the sea, as its other common name of ‘Sea Pink’ would suggest,  Armeria is a compact evergreen whose foliage will form tufts of pale green grass and during early summer it will also bear clusters of globed, pink flowers on long, slender stems. 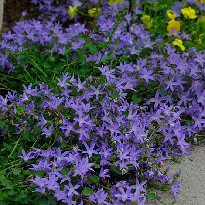 The ‘Stella’ variety of Campanula is an evergreen perennial whose cascading habit makes it an excellent ground cover plant. Its foliage is a combination of stringy stems and tooth-edged leaves, that flow between its lavender, star-shaped flowers, which appear all summer long. 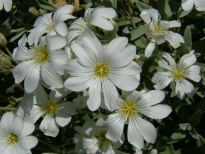 This is a spreading, evergreen perennial with sheets of silvery foliage, while its flowering contingent will litter said silver with clusters of small, white blooms with notched petals that will show from spring to autumn. Beware it rampant habits though and keep it in check – useful to cover large dry banks though.

Another evergreen perennial, however, the Gentian is a mat-forming perennial that will sprout pairs of narrow, elliptic leaves and singular deep purple, or deep blue flowers whose shape is reminiscent of a gramophone’s spout! Grow it if you’ve got limy (alkaline) soil.

This flower may be more familiar to the grandparents and music lovers among you for its common name ‘Edelweiss’, and this herbaceous perennial bears terminal clusters of  greyish-white, daisy-like flowers on furry stems and rosemary-like foliage.

Lithodora are my personal favourite in this collection due to their masses of beautiful, deep blue flowers in summer, crown shaped with golden stamen as its jewel.

Oxalis adenophylla is another mat-forming perennial. You can count on the grey-green foliage of this plant to spread up to one metre, although it does die down in winter. Foliage aside, the Oxalis also provides beautiful, shiny, white flowers with pink veining and edging in early summer. 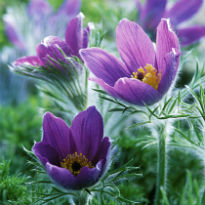 This ‘cushion’ variety of Saxifrage forms a small mound of star shaped panicles encircling short but slender stems, these will be tipped with small, daisy-like, yellow flowers during the spring, while the rosettes of foliage last all year round. 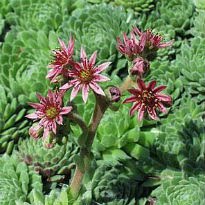 Sempervivum, and more specifically the tectorum cultivar, are also rosette-forming plants, whose succulent, evergreen foliage appears in combined russet and emerald green. These rosettes will also bear small rosy-purple flowers on thick stems in the summer.