The RHS scheme ‘It’s your Neighbourhood’ is back in full swing again this year and due to the project’s communal nature, we felt it deserved any exposure we can lend (not that it needs it). IYN’s basic premise, in conjunction with the Britain in Bloom project is to encourage groups of people connected by their proximity and their community, to try to improve the aesthetic and ecological validity of their local areas, whilst also trying to inspire an interest in the subject of horticulture in younger gardeners by proxy of their relatives.

IYN acts as a micromanagement initiative for the larger project that is Britain in Bloom, which means that any community can register to the project. The groups are mainly volunteer-led and focus mostly on the ‘clean up’ aspect of community presentation including, though not limited to, cleaning up shared spaces such as alleyways or estate greens. As a part of Britain in Bloom, IYN shares its three pillars of conduct and criteria: Community Participation, Environmental Responsibility and Gardening Achievement.

However, at the mention of criteria it is not uncommon for people to assume that there be a competitive edge involved and while this is not exactly the case, each registered community is visited by BIB assessor who, as part of the initiative, will devote time to the suggested improvement of each constituency and, based on these visits, each group will receive a certificate of achievement from the RHS, relative to how effectively the aims of the project have been accomplished by its participants.

There are five recognised grades of achievement within the course of the project and these are Establishing, Improving, Developing, Thriving and Outstanding, which are fairly self-explanatory and if a constituency performs at a consistent level of excellence over an extended period, then they may be nominated for the RHS ‘It’s Your Neighbourhood National Certificate of Distinction’.

However, not just anyone can enter the initiative – there are certain characteristics required on behalf of would-be entrants like a hands-on attitude, being representative of a community or residential group, a certain degree of sustainability over time, and that the community take responsibility for their own work.

By reading the RHS case studies on the various IYN projects underway across Britain, one begins to understand just how diverse, not to mention popular, the initiative has become. Why in Manchester alone, a participant in Britain in Bloom for over a decade now, there are over 100 independent IYN groups focused on various aspects of horticulture. With a volunteer count of over 12,000 it is believed that the city has benefited from nearly £50,000 worth of free labour! 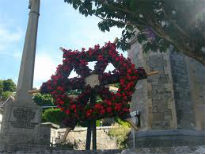 You may be thinking that there are few jobs to be done around your local area that could qualify for IYN, but this is not the case.  The responsibilities of these groups have in the past included restoring churchyards, adapting brownfield spaces for communal use, such as sporting grounds or social areas, and forming maintenance bodies to look after local parks and verges. It’s up to all of us to keep our local areas looking good and everyone can get involved –what’s stopping you?