Lavender looks good all year round with its narrow grey leaves, and the aroma they release when they are brushed against is a delight. Their wonderful spires of purple flowers open in summer and these can be cut to make into lavender bags for your pillow or underwear drawer. 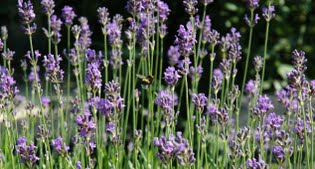 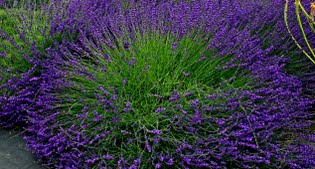 The variety ‘Hidcote Giant’ is much taller and its flower stems flop over and get in the way of the mower and passing feet which can be quite irritating. The pink and white forms are interesting, but not nearly so striking as those with the traditional lavender-purple flowers.

To do well, lavender needs a spot in full sunshine and a soil that is reasonably well drained. They tend to die through rotting if the soil is too cold and claggy.

This should be done in late summer, rather than waiting until autumn so that the plants have time to produce new shoots that will make the bushes look much better through the winter. If the winter is too harsh you may lose a couple of branches, or even an entire plant so be ready to replace any casualties in April.

The plants usually only live for three or four years but they can be replaced quite cheaply or propagated in midsummer from semi-ripe shoot tip cuttings three or four inches long. Root the shoots in sandy compost in a small propagator with a little bottom heat and you won’t have to spend money buying new plants from the nursery.

For now, enjoy your plants every bit as much as the bees and the butterflies. The flowers are rich in nectar so they play an important role in sustaining an ever-threatened bee population.

Off with their heads!
How to Save Water in Your Garden