Everybody loves fruit – it’s nature’s ice cream with more than forty flavours, it’s the back bone of our vitamin intake, not to mention a damn good looking addition to the garden.

Those of us who grow fruit trees, or will in the future, will inevitably have to learn the art of proper pruning. While this process is not essential to the plant’s survival, it is a necessary step to healthy growth and, most importantly, fruit production. Aside from the plant’s health, pruning also allows you to customise the shape of the tree and thus better equip you for its placement in the garden.

There are three key factors to observe when selecting which branches get the chop. First of all the deformation of the branches i.e. misshapenness or weak points in the limb and also whether one growth crosses detrimentally into the path of another. The second factor is often a product of the third and that is dead branches – these serve no purpose as they will bear neither future fruit nor leaves, thus they are merely a sunblock that is hurting the rest of the tree’s photosynthesis.  The final factor is disease, like gangrene it is better to lose a single a limb than risk the entire body becoming infected and you must exercise this approach with extreme prejudice. 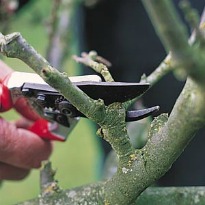 It will become evident that, for different sizes and types of limb, you’ll require the appropriate tools – the three staple instruments being a sharp set of hand shears or secateurs, their larger brother the lopping shear… 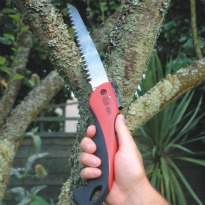 …and also a good pruning saw. It is essential that you maintain both their blades and handles as this will determine the eventual health of your trees. Cuts that have been forced due to poor handling or bluntness will take much longer to heal than those made cleanly. Never strain the shears against the branch, if it will not bore through the first time it is better to repeat the proper technique slowly than twist the branch off quickly. Wipe your tools down with an oily cloth and regularly run oil into the handles if they are wooden, keep them stored in a dry place to avoid rusting and use them only on wood, never on twine or wiring.

The branch or limb should be taken as deeply into the jaws as possible so that the fulcrum can exert the maximum pressure possible and make a clean sloping cut.

Perfect for gran’s fruit pies, this cooking apple will yield large, bright green fruits, however, I wouldn’t recommend eating them raw as they can be very tart and give you a bit of a belly-ache!  You’ll be able to recognise their ripeness by the trademark stout appearance they bear and also sometimes the one red cheek that occurs on the side that has been exposed to direct sunlight. 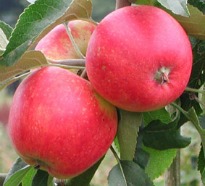 Expect this cultivar to fruit shortly after flowering mid-season – by mid-august you’ll find these crimson and yellow orbs ready to be plucked. Considered a dessert apple they have a sweet succulent flavour and an appearance more akin to that of their better known eating counterparts than the Bramley. It is among the most popular growing apples in the British Isles and it’s no secret as to why, with its superior shelf life over many other varieties. 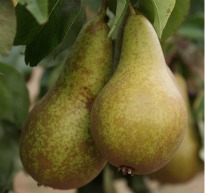 This self-fertile pear is possessed of an elongated shape and sweet, juicy flesh. Introduced in 1885 by Thomas Rivers, this home grown variant exhibited greater taste, texture and keeping ability than the competition and as such Rivers named it after its introduction at the Pear Conference of that year. As a side note, the Conference has also shown greater resistance to cool and wet weather when compared to its contemporaries and, as a consequence, now accounts for 90% of commercial pear production in this country.

You’ll find this fruit at its best in mid-late September when it will develop a rich burgundy skin surrounding bright yellow flesh. Probably the most needy in terms of pruning as the fruit is unlikely to thrive without it due to its heavy foliage. It is quite tolerant of disease, however, the fruit is prone to mould and thus it is imperative that it is picked quickly upon reaching maturity.

This gorgeous self-fertile tree will provide a heavy crop of sweet, juicy, dark red fruits during the mid-summer months, however vigilance is key to a successful harvest as the cherry is possessed of a very brief fruiting period and you’ll find stiff competition from the birds!