As promised in last week’s editorial on delectable domestic mushrooms from Oysters to Puffballs, here is the twin article that will inform on the appearance, and effects, of some of Britain’s most dangerous fungi.

Often confused, to the folly of its pickers, with the Horse Mushroom, this species is a militant little bugger that will not only damage your insides but stain your clothes and fingers yellow when cut. The Horse mushroom is among the most common growing fungus, with a white creamy cap and grey-brown interior which are both features it shares with the Stainer. Fortunately the Stainer is easily identifiable due to its titular habit of bruising yellow should its stem be cut or its heads tapped even lightly.

Perhaps the most notorious threat among the picking community is the Death Cap, a clandestine foe that will often possess a pleasant taste to lull you into false security, not to mention a delayed toxic effect during which time many vital organs will be maliciously attacked by the toxin. Couple this with its apparent physical similarities to many edible species, namely the Puffballs from our previous list, and it becomes paramount you note its distinctions-particularly its overpowering sickly scent

Aptly named for its pure white colouring and furled wing appearance, the Angel is closely related to the Death Cap in that they both comprise the amatoxins and phallotoxins that make them so deadly. Recognisable by its spongy and wilted exterior, symptoms include diarrhoea, vomiting and liver failure making the European Destroying Angel one of the world’s most dangerous known toadstools. 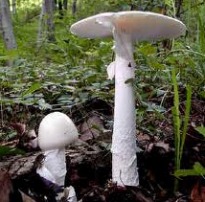 A coupling of these slender and aesthetic fungi might draw comparison to the saucers of the World’s Fair – kind, I suppose, to supply such a pleasing view to one they’ve just doomed! Possessing the same liver destroying component as the death cap, not to mention looks to kill, the Fool’s Mushroom is all too often mistaken for other common edible varieties and unfortunately, like the rest of this group, can be found widely distributed in English and European woodland. 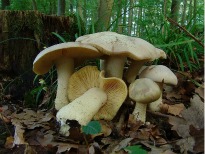 The final entry is something of an imposter, who poses as the number one on our previous list of edible fungi, and while it is not a life threatening consumption in small doses, it does bear a striking resemblance to the St. George mushroom. In fact this cultivar is such an effective double agent that it alone is believed to be responsible for  over 10% of all mushroom poisoning in Europe, providing highly unpleasant gastro-intestinal repercussions.

While not strictly causing a physical ailment, the Psilocybin species of mushroom, more colloquially known as ‘Liberty Cap’ or ‘Magic Mushroom’, can provide particular psychological distress if taken in large quantities. Symptoms are reported to include distortion of shapes and distance not to mention a consummate benevolence. The counter cultural thinking this can cause may be considered a danger by some, however, I hope the more open-minded horticulturalists among you will not throw these fungi in the same pigeon hole as its poisonous cousins!

Heed the Seeds
How to Plan a Vegetable Garden