Mistletoe – Where Did it Go? 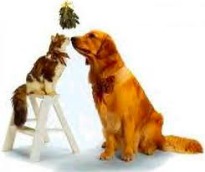 Mistletoe – second to the Christmas tree, it is the staple yuletide plant. Songs are written about it, doors adorned with it and kisses won under it, but this seasonal decoration and great matchmaker is under threat, it is believed.

The RHS is awash with rumours that the fabled mistletoe is in steady decline, with a parallel being drawn to its host trees who are suffering a similar fate. The theory goes that, due to a 60% decline in domestic orchard growing, the vegetation that would normally house the festive species has been less available.

In response to this, an action group known as the Mistletoe League Project have begun a survey into the harvesting technique applied to mistletoe which, as they say, is capable of flourishing on many other host species, but is most readily available from fruit trees due to the ease of access this offers.  The long term goal of this survey is to replenish the mistletoe population which you can help with.

If you’re lucky enough to have some growing nearby you can collect berries from which to propagate. The first and most important choice you will make is the selection of suitable fruits. If the berry is yellow or green then that means it is not ripe and should be avoided, you should aim for pure white or nothing at all. Alternatively if you don’t live near a ready supply, any specimens you’ve been using over the festive period can be revived by soaking them in water. Store them in a jar of water and keep the jar cool until planting season in late February. 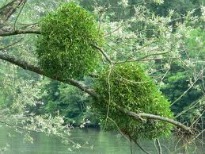 The second phase of mistletoe cultivation is selecting an appropriate host. While it is established that they will do very well on apple trees, it will also do well on pear trees or even Pyracantha. Rose bushes are also a good place to start as their brittle branches will allow the mistletoe to densely intertwine into a strong foundation. Whilst Mistletoe is parasitic, unless it gets too big, it is not generally harmful to its host, but nevertheless, always choose established, healthy specimens to try to ensure success.

When approaching larger hosts such as the aforementioned tree species, it is difficult to strike the right balance between sunlight exposure and vulnerability to predators.

There are two techniques to combat this; the first is fairly acrobatic in that you should attempt to locate the seeds in the crooks and hollows of the tree’s higher branches – this will allow plenty of exposure to sunlight and you can ward off hungry birds with a well-placed sheet of hessian secured with twine.

The second technique involves cutting slots beneath the tree bark and creating small ‘pages’ that can be folded back over the seed. It is important with both that you removed the seed from a plump, hydrated berry with some of the flesh intact to further encourage initial germination.

Remember, however, that mistletoe propagation is a numbers game, as even a healthy seed has a fairly low rate of germination – less than 10% generally – so be meticulous about marking where you have planted them so you don’t end up shooting yourself in the foot!

How to Plan a Vegetable Garden
Which Wonderland