The concept of a large garden is a very a romantic idea to many of us, particularly those of us accustomed to the pace of urban living – the idea of not only a sanctuary, but an entire realm that is ours to enjoy and relax in. However, the creation of such a place can be a daunting undertaking at first glance, so, for those of you lucky enough to be approaching a project of scale, we’ve compiled our best large garden design ideas.

The first step to success in any major project is gauging what needs to be done – making a plan or in this case, a design. This is very important in order to avoid a disjointed outcome.

When applied to gardening your first step ought to be which style or function you want the space to have. Traditional Japanese gardening may be very aesthetically pleasing, for example, but is it sustainable over a very large space – or practical, for that matter, if you’ve got small children?

The good thing about a large space is that you can compartmentalise it in order to incorporate several styles – you may choose a mixture of formality and informality in order to provide multi-functionality to the space.

If this is the route you decide, we would recommend coordinating the more formal, aesthetically focused areas closest to the house so that they may be best appreciated from what is your most comfortable viewing position. Then, more practical, informally designed areas can be placed at a distance where their more chaotic appearance won’t disturb the visual serenity of the garden.

This concept of separate spaces is not a new one – Sissinghurst Castle Gardens in Kent is an excellent example of a horticultural space divided into ‘rooms’, each specialized to serve a style or purpose. So your large garden design ideas might pay homage to the exotic flora of the world or particular branches of the floral family, while other areas might typify the characteristics of Lancelot ‘Capability’ Brown who defined English landscape gardening forever by his inclusion of natural features into formal design.

Unfortunately, the work of Brown went largely unsung after his death due to a rejection of the tamer, tranquil nature of his designs. However, in his reverence to burbling streams and rolling fields, Brown established a purity well known among his Japanese contemporaries as ‘Shakkei’, whereby one would emulate and borrow surrounding scenery in order to bear respect to the natural surroundings of the garden.

Regardless of your approach, an appreciation of nature is inescapable when building a green space, and you may also consider devoting some of your space to a ‘re-wilding’ project and plant an area of woodland or wildflower meadow for you and your family to enjoy.

While play areas are also a fantastic way to introduce your family to the outdoors, herb and vegetable gardens, as well as orchards, create a tangible affection for nature that is manifested through their already-established relationship with food.

The balance to be struck with large garden design ideas is fundamentally identical to that of modest spaces – we must analyse the needs of those using the space and weigh it against our own aesthetic principles, the only difference is scale.

As the saying goes:

“The one who moves a mountain begins with the smallest stones.” 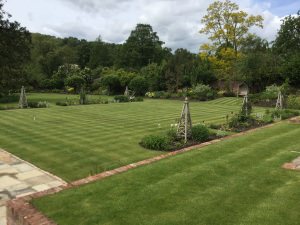 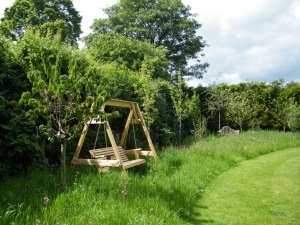 The Characteristics of Contemporary Garden Designs
The Jungle Look