A community in east London has recently been treated to a huge undertaking, in the environmental sense, as St. Stephen’s Green in Bow has been transformed into a spectacular outdoor play area and recreation ground. 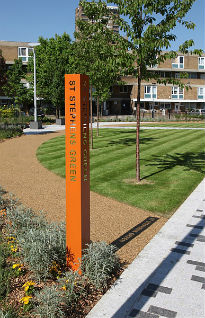 Now we’ve spoken exhaustively on the benefits of added greenery, well, anywhere! But this impetus multiplies when you consider urban environments, because it is in these places that the plants’ presence is really felt, where they can perform a number of important tasks. Plants’ powers include cooling the surrounding air whilst also purifying – heat and pollution being major sources of discomfort in the city. The presence of tree canopies helps to distribute and slow the fall of rainwater, thus reducing the risk of flooding. There is also the ecological advantage because, let’s face it, every tree and flower is a potential home for some form of wildlife and finally, perhaps the most obvious reason, they’re just good for us – whether it be indirectly through their psychological effects, or more directly by cleaning the air we breathe.

However, I’d like to devote the remainder of this piece to the more innovative aspects of the Bow project, so we might avoid treading water on previous blogs. First of all, let’s consider the design and aesthetic of the garden – two lawns, one smaller and one larger, dominate the landscape of the park, with intersecting pathways cut through both. These are offset by the whimsical insect sculptures that have been integrated to capture the affection of children from the area. Alice in Wonderland, I am told, was one of the major inspirations behind the design of the Park, however, the company responsible also had sustainability fairly high on their agenda. All of the site’s paving, for example, is constructed from sustainable natural stone, including limestone and two types of granite.

But the guiding idea of the project was the inclusion of local residents, and while the sculptures of giant flowers and animals make for excellent decoration, they are also there to distract the youngest of adventurers while their elders might enjoy the fitness trail established solely for them, or alternatively the gym.

Whatever the motivation behind the park, it is clearly a success in its own right, although anything that will add some greenery to the big smoke has my seal of approval.