– How to say it with flowers 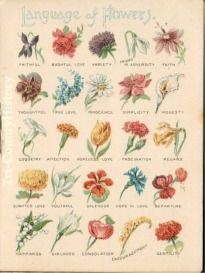 Since Juliet first lamented, and earlier still, all manner of flowers, trees and shrubs have been used as a form of language due either  to their appearance, or their meaning to the beholder – symbolic of every emotion and concept we could think of and one of the most frequent characters in all English literature and theatre, even if they had no lines. Also, flowers have been the most common adornment for the home and person, appearing on all manner of clothing, hairstyle, furniture and pottery.

The Greeks had a strong belief in the holistic and medicinal qualities of certain flowers, even when there were no logical grounds, aside from myths, to assert the claim. For example, the Orchid was very closely linked with fertility and as such it was believed that if a soon-to-be mother chewed its petal then the child she bore would a girl, whereas if the father were to partake then the infant would be a male.

However, over hundreds of years of cultivation, (linguistic that is), the language of flowers was honed, and there came a time when one could convey whole letters through meticulous selection of the right bouquet. 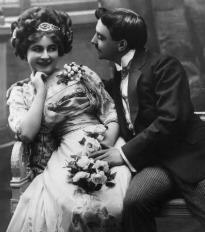 In the Victorian era, when poetry and works of art were far more prevalent as tools to woo a potential partner, the romancer would often combine bouquets of flowers based on their etymology in order to construct a visual poem for the object of their desire.

It is from this purpose that the language of flowers stems, and there are entire dictionaries available online or in bookshops that further detail the modern day translations of these connotations from the most obscure, such as Daisy, Hyacinth and Ivy which suggested innocence, sincerity and fidelity respectively, to the Forget-me-not whose Victorian counterpart is somewhat obvious to the average observer. However, love is the consistent theme, with various flowers branded to accommodate its many forms, like the Yellow Tulip representing the feeling of being hopelessly in love. A striped carnation often represented unrequited love and a subsequent apology to the admirer for the situation, while a pure red carnation was a symbol of admiration of the recipient. More remarkable perhaps is that poisonous flowers would often be used too, as a warning, such as the Monkshood (Aconitum), which suggested to the recipient that they were in imminent danger. 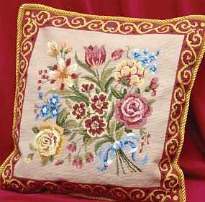 The tradition of symbolic bouquets survives today through one of the Victorian eras other great components, the Christian faith. It is from these sensibilities that stems the existence of bridal bouquets and funeral wreaths. While we’ve already mentioned some of the more obscure connotations of the language, the most prominent legacy that it’s left to us is the presence of flowers in our religious ceremonies. Asphodels are still common at gravesides as they encouraged feelings of regret and of mourning, and lilies still feature regularly as part of the palette of a wedding though only in white, symbolic of purity. 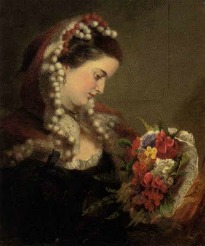 Finally, there is that Valentine’s day institution, the red rose, which represents the most passionate of infatuations. However, as that auspicious date looms imminently upon our horizon, I would try here to encourage some originality and perhaps with this guide you can surprise the object of your affections and  state in a bouquet what can’t be said in words.

Orange is not only a Fruit
What’s in a Name?