A rockery can make for a very interesting focal point in a garden and also an excellent platform on which to plant choice specimens where they can be raised and appreciated. It also allows you to manipulate the height and shape of your garden, much like directors with their stage.

First of all, pick a site in full sun as, not only can the monotonous colour of rockery stone appear very drab in a shady spot, but many of the alpines you will plant need full sun to flourish.

When cultivating your chosen spot, it’s important to note the threat that weeds will pose on the aesthetic of your project and eliminate them with extreme prejudice before you start! 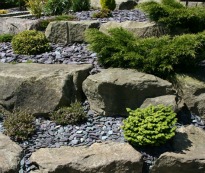 Next you should think about forming the mound for the rockery and this can include anything ranging from old discarded bricks or rubble, to up-turned pieces of unwanted turf, or just plain soil. Alternatively, raise the level of ground, I would suggest a few railway sleepers as a cheap and effective alternative to tons of soil! For the planting medium, if your soil happens to be particularly heavy, try mixing it with some sand or grit as it needs to be free draining for the type of plants you will grow. Height and shape are also important for the same reason – if the rockery is on a downward slope then water will be dissipated much more quickly and efficiently.

The second phase will involve actually deciding which types of rock you wish to use and the priority here is to make it seem as natural as possible. To this end, try to choose stone that is indigenous to your area, or at least try to  avoid the beach ball shaped stones that they have at garden centres as these have an inescapable artificiality to them that would ruin your rockery design. Instead try to stick to flat shaped rocks as these give the tectonic impression that will cement the sites authenticity. Always bear in the mind the size of your rockery and scale the stones to match. The structure of a rockery is much like any good mosaic, the pieces don’t fit together like a puzzle but rather their pattern emerges from their seeming randomness. However, you also need to avoid the ‘currant bun’ effect and group stones to give the impression of natural rocky outcrops.

Make a base layer of your largest rocks, overlapping them and half submerging them if need be, sloping the stones backwards into the soil. At each level you should seek to increase and decrease the height and stone size respectively, however be wary of creating the overall slope too steep as this can lead to a miniature landslide in heavy downpours! It is also crucial that you have a basic idea of the planting scheme of your rockery and leave planting pockets in the rocks accordingly. Once you have planted out, add a mulch of shale or gravel, both to add to the aesthetic look of the rockery, but also to protect the plants from winter wet rotting their crowns.

Finally, why not consider adding a water feature as the final crowning centrepiece to a rockery, which would not only provide some fluidity to a stationary feature, but will also help to attract wildlife to your garden.