In the approach to Remembrance Sunday we find ourselves sobered by our appreciation of those who so selflessly gave their lives in defence of the world we now live in.

Commonly one will wear an artificial poppy to symbolise the significance of the flowers that were to later adorn those theatres of butchery over ninety years ago and to reflect on that poignant horticultural occurrence that, separated by great distances, persists to this day on Flanders’ Fields, across the plains of Belgium and France and parts of modern Turkey. 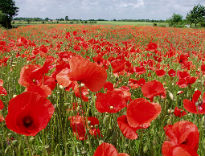 It seems like providence, or perhaps cruelty, that the flowers of the annual poppy, ‘Papaver rhoeas’, should show such a vivid red, making their association with the blood spilt on the battlefield all the more moving, but they also represent life in the wake of great death. Recovery. Reconciliation. Hope.

These are themes that I would hope we might take from regular gardening in our daily lives, but there are many other varieties of poppy to brighten our gardens that do not carry the same, perhaps sombre connotations. Do be careful though as all Poppies are toxic. 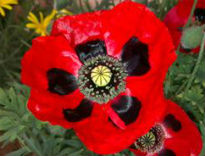 The appropriately named annual ‘Ladybird Poppy’ possesses a similar red flush to those we wear on our lapels, however, it holds one key difference with its prominent black patched centre which gives it its name. Plant it in a sunny spot. 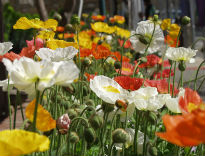 ‘The Champagne Bubbles’ variety of ‘Iceland Poppy’, as they are also known, derives its name from the myriad of colourful, tissue paper-like flowers it produces in the summer. They are highly attractive to bees and butterflies and can survive most weather conditions. 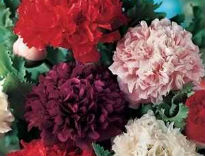 This tall, erect and hardy annual, also known as the ‘Opium Poppy’, possesses grey-green foliage and double flowers in colours ranging from white to pink to purple, and these will be borne throughout late spring and summer. These plants are fairly fragile, however, and for this reason I’d recommend not planting until mid spring and the assurance of no more frost has arrived. 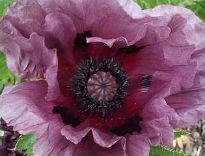 Definitely my favourite variety of poppy is the perennial ‘Patty’s Plum’, which with its beautiful mauve petal colouring and jagged petal edges looks almost like a cross section of amethyst when in full bloom. In order to achieve this fullness of colour and shape though, it requires full sunlight and a sheltered position. 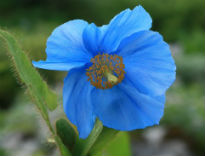 These bristly beauties are another perennial variety of poppy with bright, neon-blue flowers that will pale over the progression of the summer months, giving them their common name of ‘Himalayan Blue Poppy’. However, to achieve their colour one must follow a specific regimen, as the plant prefers sheltered positions in partial shade and acidic soil content. 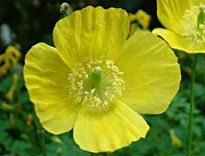 The ‘Welsh Poppy’ is a cheerful bright yellow variety that blooms primarily in the summer. It also prefers acidic or neutral and consistently moist soil in partial shade to achieve this.

Thinking of Ms. McVicar
Prison Garden of the Year