As luxury garden designers, we are becoming conscious of an increasing popularity in swimming pools and other water based entertainment within the domestic setting, due in part to rising temperatures (the BBC reported 2015 as the hottest summer in the northern hemisphere) and also the explosion of interest in health and fitness that Britain has seen recently.

The first task of pool construction is deciding where to site it and luxury garden designers will tell you that there are several pitfalls to be avoided here, the first of which is not to build near overhanging trees – while a crystal surface dappled in broken sunlight might seem appealing, the reality of constantly fishing leaves from the water is less so. It is also important to recognize that, while our summers are improving, they can be still be chilly in the shade and so we’d recommend either choosing a wide open space or at least in a sunny spot.

Pools can be above ground or sunk in, although in terms of the aesthetic, the latter is obviously better. There is a wealth of creative freedom in terms of size, shape and design and also construction method. You could go for a reinforced concrete swimming pool with tiled interior, however, the sustainably minded might balk at the environmental cost due to the carbon footprint of concrete production. Alternatives include pre-formed fibreglass designs which, unlike concrete, imply virtually zero lifetime cost as well as providing a smooth, non-abrasive surface, not to mention that seating and other design features can be integrated into the shell during manufacturing. There are also polyvinyl options which boast the lowest installation costs of the three, whilst also possessing the design fluidity of concrete and the smoothness of fiberglass. However, these also have the most pressing maintenance costs at an average of every 7-15 years.

Pools are usually surrounded by paving or decking but take care to choose versions that are non-slip for safety.

Obviously your choice of construction method and which designer’s advice you heed might dictate the overall shape of the pool, however, we, as luxury garden designers, would recommend you plan this based on the dominant themes of your garden. If you are a formal gardener and love lines and geometry then a rectangular or square pool is likely to form a dramatic centrepiece. However, if yours is a wilder space, possessed of undefined borders you might consider a kidney or naturally shaped pool, or even one with a natural filtration system so as to forgo the use of chlorine, although an outdoor shower is also a useful addition to your poolside as an excellent way to avoid prolonged contact with such chemicals.

The choice to install a natural swimming pool is both an ecologically and financially sound one since their maintenance costs are practically non-existent, so, despite the significant initial investment, over time they prove cheaper than their artificial competitors. While a natural pool might require more space for set-up, it is also possesses a rural charm in that it can effectively mimic scenes from nature without exposing the surrounding environment to chlorine and ph balancing substances.

Luxury garden designers will include additional structures such as pool houses to change in and to shelter from the sun, and hot tubs to relax in, as these will further complement this ambitious addition to your green space and will mean that your experience will be heightened by these added comforts and make the pool itself a more welcoming place to be. 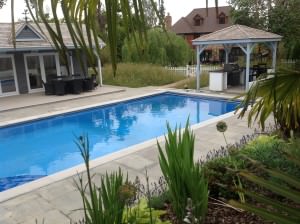 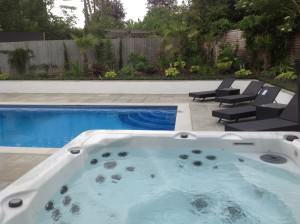 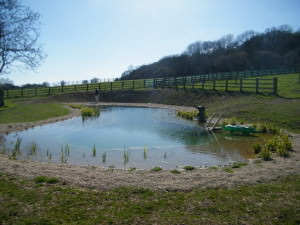 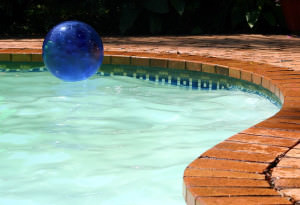