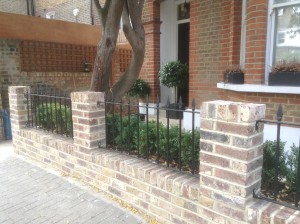 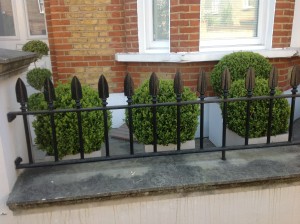 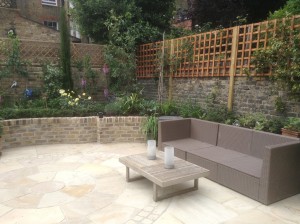 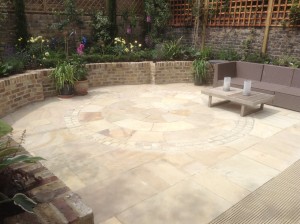 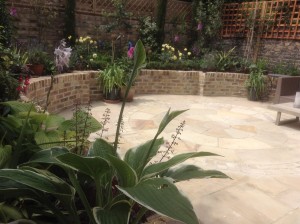 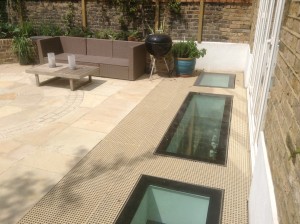 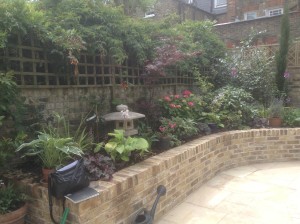 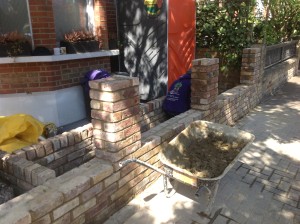 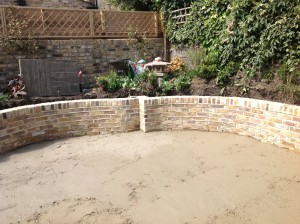 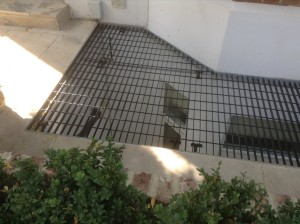 These are the front and rear gardens to an end of terrace, Victorian property in a quiet residential road in Battersea.

The gardens were originally re-designed when previous renovation work was done to the house, but it appeared that it wasn’t to a very high standard as some elements were visibly degrading. The gardens also did not suit our clients’ tastes and were impractical to use in some ways as, in the back garden, the decking became slippery in winter and the built-in storage was not watertight, rendering it virtually useless.

The owners also did not like the contemporary raised beds in the back garden or the standard block paving and new bricks in the front garden, as they didn’t feel that the paving & bricks complemented the age and style of the property.

In the rear garden everything was to be cleared, apart from the oriental lantern and some of the plants, including the Cox’s apple, the Lilac, the Hydrangea, the roses, the Clematis, the Trachelospermum and the Rhubarb.

Our clients wanted the new design to be both pleasing to the eye and practical for the family to use.

In the front garden

We exchanged the block paving for riven sandstone in the colour ‘fossil mint’, for its colours, texture and longevity. We also rebuilt the steps up to the front door, so that they were not quite so steep. Using the same riven stone also means that they do not become slippery when wet, as did the original smooth tiles.

We built a new front wall, of similar height to the original, using reclaimed bricks to match the house as closely as possible. We added new railings to the top of the wall, included a new matching gate, and the original grating above the light well was powder-coated in black to match the new railings. The large Arbutus tree had to stay, so the new scheme had to work around that.

In the rear garden

We replaced the decking with natural stone with a feature circle at its centre to which we gave a brick edging.

This was the same sandstone as in the front garden and we installed new, fibreglass tread to the area surrounding the inset windows to the basement. This tread is designed to be walked over, but is not too heavy to lift the panels should the need arise.

We built new raised beds using reclaimed bricks to fit in better with the boundary and the house. We introduced some curves, which help to soften the boundaries of what was originally a rather square and angular space, and we took care to ensure that we did not compromise the usable space.

The planting scheme for these beds is fairly traditional in style, but soft, rather than formal. Apart from the plants that our clients wanted to keep, we added planting to give year-round interest, including a mix of evergreen and deciduous plants, with colour coming from both foliage and flowers and the scheme gives definite colour changes through the seasons.

We used traditional garden plants such as Alchemilla, Agapanthus, Foxgloves and Poppies, and included a white-stemmed birch tree in the southern corner. This not only provides some screening from neighbouring buildings, but also to bring a bright splash to what is a darkish corner.

Privacy is a bit of an issue to the rear of the property, but whilst we couldn’t completely obscure the buildings there, we introduced some height to minimise the ‘goldfish bowl’ effect.

It was also important in the smaller space to make the most of the verticals and we brought in new climbers to supplement the existing and added some pencil cypress for height.

Lighting adds an exciting dimension to the garden, making it not only usable on summer evenings, but also visually accessible in the winter months. It also has the effect of keeping the eye within the garden space, reducing awareness of the surrounding buildings, and with inset lighting to paving and raised beds, and up-lighting to trees, structural planting and focal points, the effects can be dramatic. The lights are on different circuits and by taking advantage of different combinations of these, a more subtle feel can be achieved according to the mood and occasion.

Storage is always at a premium in town properties and therefore the owners wanted to make the most of the space in the side return. They were happy to keep the bikes and motor bikes just standing inside the gate, but wanted somewhere to keep small garden tools, pots etc. To accommodate this we built a small store against the wall sufficiently large enough to hold tools, but not too big that it can’t be passed easily. A hinged shelf that folds out was built to one side to be used for potting up etc. and it is easily folded back into the store when not in use.

Finally, we added an automated irrigation system that will look after the garden when our clients are on holiday in their other property in France.