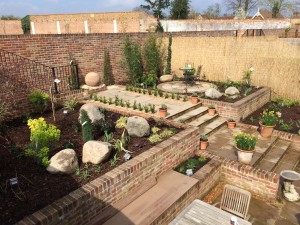 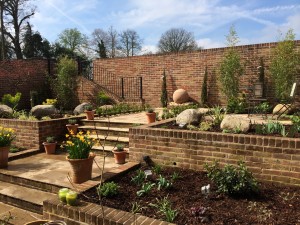 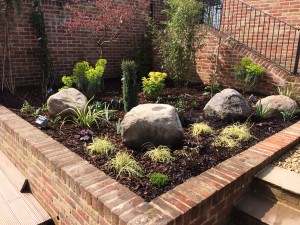 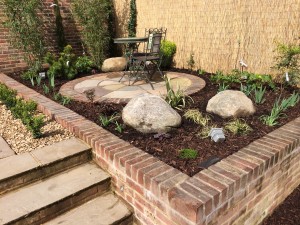 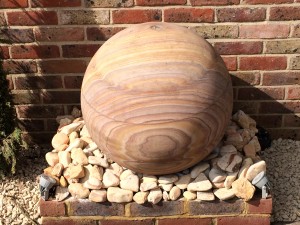 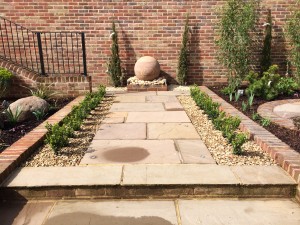 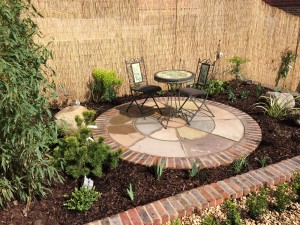 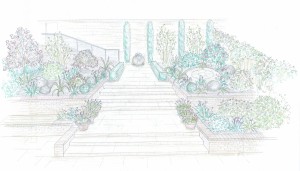 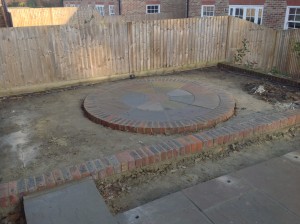 This is the back garden to a substantial, semi-detached, mews-style property in the grounds of a former manor house in Harefield, Middlesex.

Our clients had not lived in the property long, but were keen to bring some life into what was quite a bland space. The back garden is arranged on two levels and originally had a paved patio next to the house, with steps up to two lawns either side of a gravel path. In between the two levels there was also planting beds to either side.

The owners didn’t wish to change the structure of the garden as the current layout worked well for them, but they wanted to add some more interesting features.

The original Indian Sandstone paved area stayed, but we removed the lawns and introduced more planting to provide year round interest and colour.

We added a smaller seating area to take advantage of the sun on the upper level in the back, right corner of the garden, which is big enough to hold a bistro table and two chairs.  The original paving was matched to the existing paving for continuity.

The gravel path was removed on the top level and paving was laid instead, although the path didn’t need to be quite so wide, so we left some gravel at the sides and planted through it with Box hedging.

The view from the house into the garden is channelled by the steps and path up and towards the back wall, so it made sense to create an attractive focal point there. We placed a spectacular rainbow sandstone sphere at the end of the path, drilled to form a water feature that not only contrasts wonderfully with the red brick wall, but also introduces the soothing element of sound. It also looks stunning when up-lit at night.

An existing raised bed that contained gravel was converted into extra seating by adding a timber top using composite decking. This has a much longer life than conventional timber and will not fade, rot or warp. We included planting beds at either end for herbs, which is handy for both the barbecue and the kitchen.

The planting scheme for the rest of the garden has a broadly oriental feel, although our clients didn’t want it to appear too ‘themed’. Interesting foliage plants were included, such as Acers, ferns and evergreen grasses with some extra colour in the form of flowering perennials. There are also some perfumed plants near to the seating areas and entrances.

To enhance the somewhat formal layout of the garden, as well as adding the previously mentioned Box hedging to either side of the path we also added pots of Lavender to flank the steps and some Pencil Cypresses were arranged along the back wall.

Bamboo screening was used to clad the fence on the right hand side of the garden and an attractive log store was constructed next to the air conditioning unit on the patio.

Lighting adds an exciting dimension to the garden, making it not only useable on summer evenings, but also visually interesting in the winter months. With inset lighting to the sides of the steps, new path and second seating area and up-lighting to the water feature and structural planting, the effects are dramatic. However, by including different lighting zones that can be independently switched on and off, a different feel can be achieved depending on the mood and occasion.