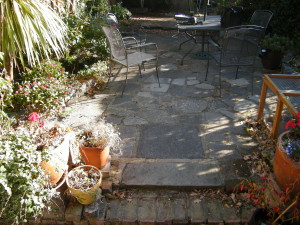 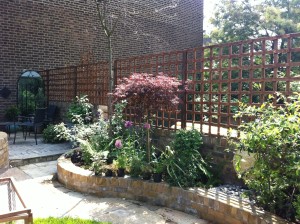 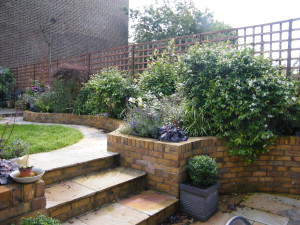 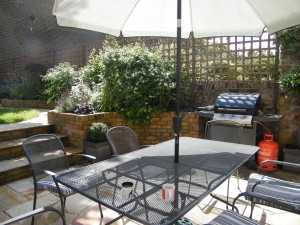 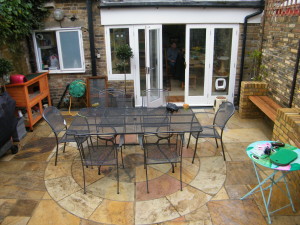 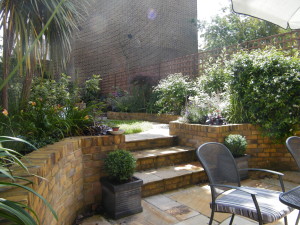 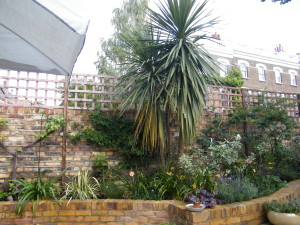 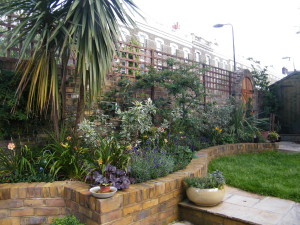 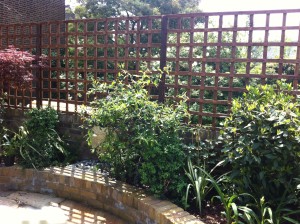 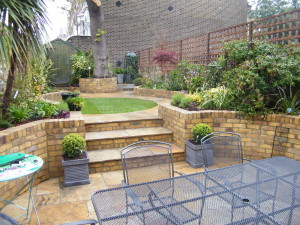 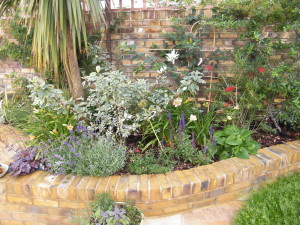 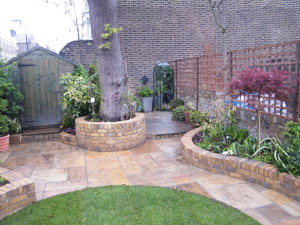 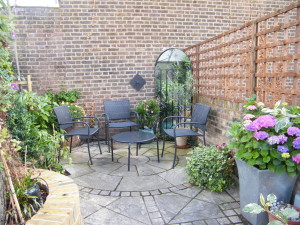 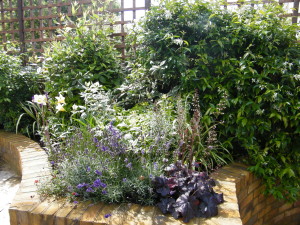 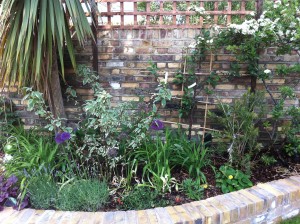 This is the rectangular rear garden to an end of terrace, corner property in Camden. Below you will find more details on this Camden Garden Design

As our client needed to have the side walls of the garden re-built, this seemed like the perfect opportunity to re-vamp the whole garden. They wanted to re-introduce a small lawn, which meant losing the central paved area that they were currently using as an area for a table and chairs. The other paved area next to the house was just too small, so they wanted to push this out a bit and use it as their new seating area.

While creating the new garden, we used this opportunity to lose one of the existing levels, so that the garden ended up with just three, one next to the house, one for the lawn area and the final one being left as it was – the existing seating area at the back. This was already laid with natural sandstone so for continuity it made sense to use the same material for the new paving.

The large Oak tree at the back was casting a long shadow so we lifted its crown to let more light into the garden. There was also some interesting existing planting that the owners wanted to keep, including an established grape vine, an Acer, and an evergreen Jasmine.

The paving next to the house now has enough space to dine comfortably, and it also accommodates the existing barbecue that the owner loves to frequently use. The rabbit hutch has a new home in this area too and to one side of the patio we included a built-in seat to take full advantage of the sunny side of this corner of the garden.

On the second level we created a curved lawn of Kentucky Bluegrass that reminded the owner of his home, with a path wrapping around it leading to the upper level. On either side are raised planting beds that follow the edge of the circle and serve to soften the rectangular shape of the garden. These can also provide some useful occasional seating and to create these, we used yellow London stock bricks that complement the house and new boundary wall.

As the top level was no longer needed to park a car, the double gates were removed and replaced with something more romantic in the shape or a brick arch over a timber gate, designed to give a ‘secret garden’ feel.

We also used a mirror in the far corner of the garden on the original seating area, to achieve the same ‘secret’ effect and also to reflect light around the space.

The existing shed stayed and we planted some more interesting climbers to conceal it. The oak tree became a more attractive feature, as opposed to merely dominating the space. This was achieved by building a raised bed around it and by growing climbers up its trunk to create colour and interest throughout the seasons.

The planting scheme overall is fairly traditional and quite low maintenance, arranged through the raised beds and in pots on the patios. The owners had no real preference as to colour, although they did like contrasts such as purples and yellows.  Our clients liked Lavender, Cornus (with the red stems), Broom and Day Lilies, and asked for some perfumed planting to be included too. We also incorporated a variety of herbs into the scheme. Overall the scheme is colourful, easy to look after and provides year-round interest, so form and foliage was important. As there were cats in the house, the planting also needed to be non-toxic.

A small wall-mounted water feature adds the relaxing element of sound and lighting adds an exciting dimension to the garden, making it not only useable on summer evenings, but also visually accessible in the winter months. With practical lighting to the barbecue, the paved areas, retaining walls and steps, and up-lighting to the oak tree, structural planting and water feature, the effects can be dramatic. However, with the use of different circuits, a more subtle feel can be achieved, according to the mood and occasion.