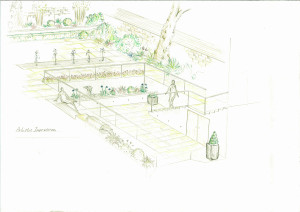 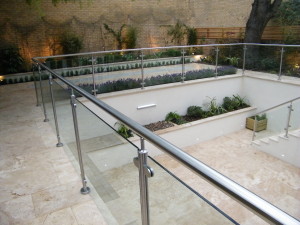 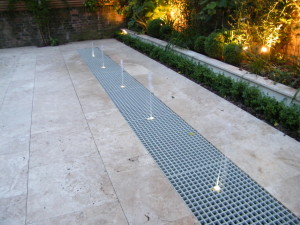 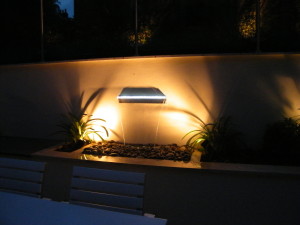 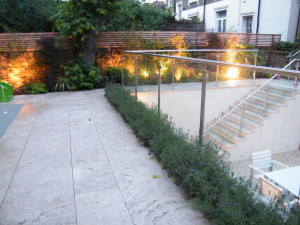 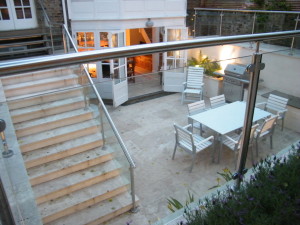 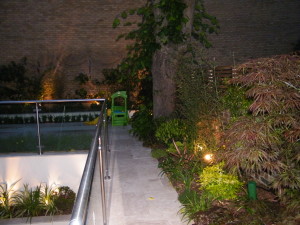 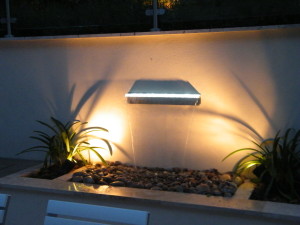 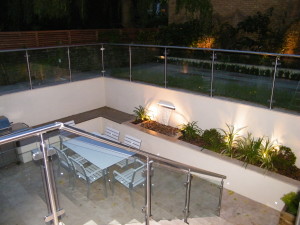 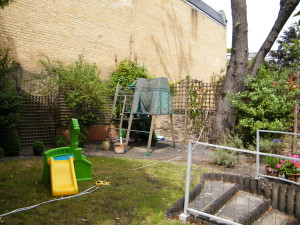 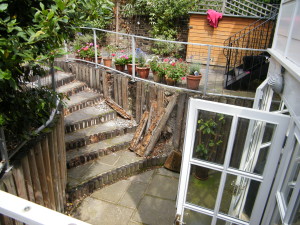 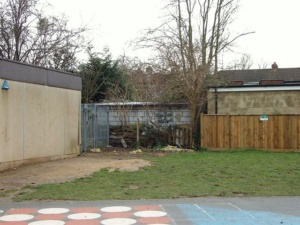 This is the rear garden to a substantial house in Maida Vale, London.

Our clients knew that their garden was an extremely valuable asset, but the way that it was arranged did not realise its full potential. The state of the retaining walls and steps made it unsafe to use, which prompted a complete re-design.

The quality of the building, and its interiors, was not reflected in the outside space and this was something our clients wanted to rectify. They also wanted a clean, contemporary feel to the finished garden.

The area outside the kitchen/dining area was just too small to use comfortably for dining or entertaining, so we decided to push the retaining walls back to give more space. This required substantial excavation, but with the retaining walls it became a much more useful area. Pushing the walls back and using a rendered and painted finish allowed more light into the basement rooms.

For the floor surface we used natural Travertine as this is light in colour and also provides continuity between the inside and outside.

By replacing the existing wire balustrades with glass this also allowed more light into the property and facilitates the views up to the rest of the garden from inside.

We replaced the existing wrought iron railings to the steps from the upper floor to match the new balustrades and the new steps were constructed using composite decking to make a pleasing contrast to the Travertine. Built-in seating on the lower patio also has a composite top which ties the two areas together.

We created some underground storage, cut into and under the steps that lead from the lower to the upper level.

In the upper area it was difficult to maintain a lawn due to the two large, over-hanging trees, so the upper area was paved to match the lower patio.

We added two, very different water features. On the upper level we included a rill running across the back of the garden, with jets of water at intervals that look spectacular when up-lit at night. On the lower level we installed a letterbox feature with a sheet of water dropping onto pebbles in one of the raised beds in the patio area.

The planting scheme is low-maintenance and includes bold, structural foliage that will look good all year round. In terms of colour, our clients wanted blues, mauves and whites and their favourite plants included lavender and Agapanthus. We also included a few herbs and some perfumed plants, especially around seating areas.

We built a raised planting bed in front of the dominant rear wall and placed some vigorous evergreen climbers on tensioned wires that will help to disguise it.

Some striking horizontal cedar trellis was added to the side walls to enhance the contemporary feel of the garden.

The lighting adds an exciting dimension to the garden, making it not only useable on summer evenings, but also visually accessible in the winter months. With inset lighting to the paving, steps and retaining walls, up-lighting to the trees and structural planting and lighting to the rill, the effects are dramatic. However, with the use of different circuits, a more subtle feel can be achieved, according to the mood and the occasion.