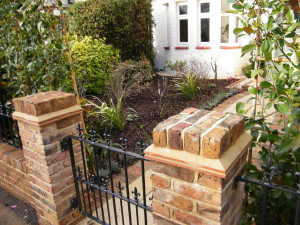 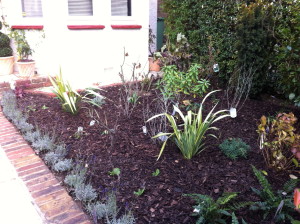 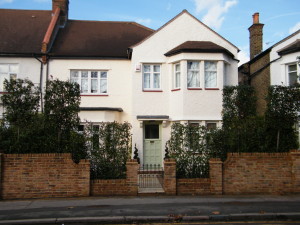 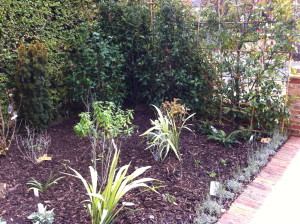 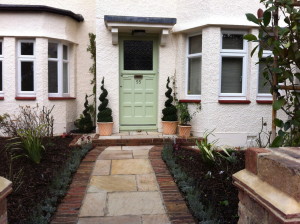 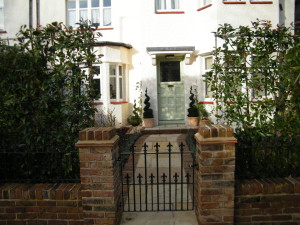 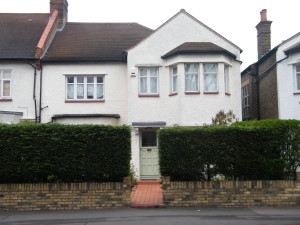 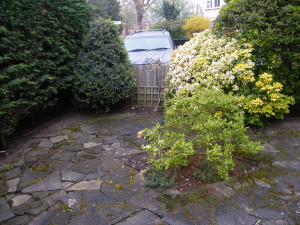 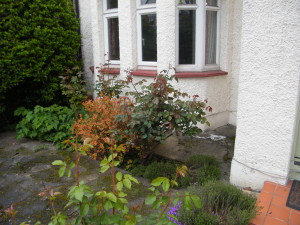 This is the front garden to a substantial, double-fronted, Edwardian semi-detached property on a busy main road in Dulwich Village.

This is an attractive property and our clients wanted to create a more welcoming entrance that complemented the style and age of the house, whilst still giving them privacy from the busy road and screening to the nearby bus stop.

It originally had mainly crazy-paving, with some inset planting beds and tall planting to the boundaries. The path leading from the pavement to the front door was red-tiled, with a low, yellow brick wall that formed the pavement boundary, behind which there was a conifer hedge providing some privacy from the road.

We removed the existing paving to create much more of a garden feel to the space and also to provide more attractive views out from the front drawing room and study.

We removed the retiled path and recreated it using new paving to complement the colour of the house walls. The path was edged in a reclaimed, soft red brick to complement the red tile detail to the window sills.

The concrete paving underneath the bay windows had to be retained for maintenance purposes and for window cleaning, but we concealed it beneath a layer of  Cotswold chippings retained behind a brick edge.

Privacy from the road was an important consideration and we built a new brick wall to the pavement boundary, again in reclaimed bricks, topped with traditional wrought iron railings and incorporating a gate to match. The top of the wall was shaped, rather than straight, to add interest. Height is provided by evergreen pleached trees, which don’t encroach on the garden space and, in order to provide increased privacy, taller specimens were planted in each corner so as to screen out the bus stop. The wall underneath was stepped down from the corners inwards, in order to cover the bare stems of the larger trees.

There was already some tall planting to the two boundaries with the neighbours – a privet hedge to the left, and tall shrubs on the right, which were retained. There were also some other shrubs in the garden some of which we were able to retain for the new scheme and some were moved into the rear garden.

The new planting scheme has a cottage feel, but is also be fairly low-maintenance, drought resistant and will look good all year round. To this end there is a mix of easy-care shrubs and perennials to provide both interesting contrasts of foliage, and colourful changes through the seasons provided by flowering plants. The owners had no particular preference for colour, but wanted some perfumed planting. Their favourite plants included Wisteria, climbing and shrub Roses, lace-cap Hydrangeas and Primroses and they also particularly liked grey/silver foliage.