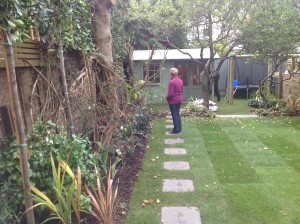 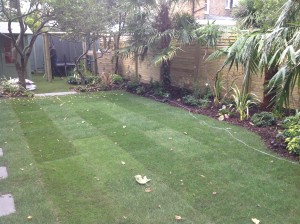 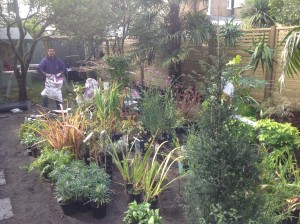 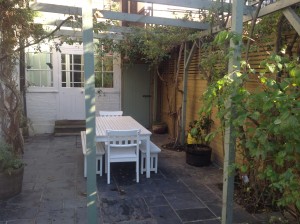 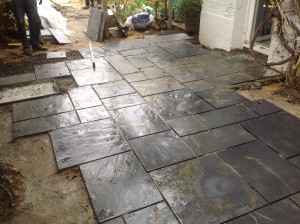 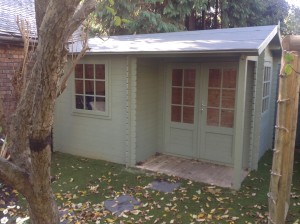 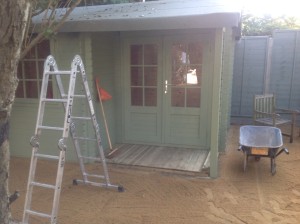 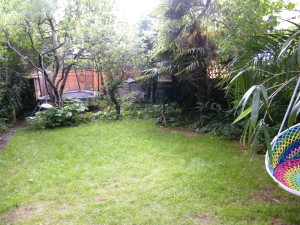 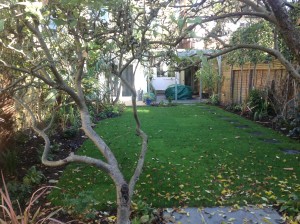 This is the rear garden to a semi-detached period property in Fulham.

Our clients’ main problem with their garden was that it was too shady, meaning that it was neither inviting to use nor was it easy to grow what they’d like, including a decent lawn!

They wanted us to let more light into the space by removing one of the large existing Holly trees, some of the branches of the Cherry on the southern side and by reducing the Acacia on the northern side. They would also consider taking out the small fruit trees to the rear of the garden, if that made sense in the new design.

Light was let into the side patio by pruning the existing climbers but privacy is maintained on the southern side by the planting of evergreen pleached trees which have the height required, but do not encroach into the garden or cast too much shade.

At the same time as opening up the garden in this way, our clients wanted to improve the design of it. They didn’t want a radical change, as there were features they wanted to keep, including the decking, pergola and much of the planting, but they wanted to upgrade some of them, including the patio and shed area.

The side patio was an important area as it is used for dining and entertaining, and is overlooked from the kitchen and conservatory. We kept the pergola and its climbing plants, but changed the paving as it was rather uneven and didn’t match the owners’ style. We used dark grey slate in a riven finish and laid it in a traditional random pattern, which contrasts very well with the original paint colour of the pergola and creates a relaxed dining area, seating up to ten people.

There is room for a table and barbecue and there is plenty of room to move around comfortably and have access to the side gate.

In the main garden, we kept the original deck, as it was fairly new, along with the pond and water fountain, although we did improve the planting to the pond.

The lawn needed to be replaced as with the work going on in the garden it didn’t survive very well and that with the fact that it is was a mixture of turf and seed meant that it had never really looked at its best. We kept to a fairly similar sized new lawn but changed it to be rectangular, which makes it practical, both for play and maintenance.

We removed the existing path and added stepping stones that reach the rear of the garden, which are set into the border on the southern side.

The rear of the garden was a bit of an eyesore, so we replaced the old shed with a more attractive storage solution and the children have a trampoline next to the new summerhouse together with new a timber play structure.

The new planting scheme takes in much of the existing plants as it was so structural and interesting, however, we added new specimens to add more colour and interest throughout the seasons. The owners like lush foliage plants, but also like many of the traditional garden favourites such as Lavander, Iris, Japanese Quince, Crocosmia, Euphorbia, Geranium, Verbena, Poppies, Clematis, Hops, Acers and Fucshias. Their favourite colours are purple, blue and white, but we also added splashes of brights, such as orange and red, for contrast. We included some perfume in the garden and also planted some herbs near to the kitchen for easy picking when needed.

Finally, we replaced the fence to the north-western boundary with the same type of fencing that was on the other side of the garden, and we painted the fence at the rear boundary.