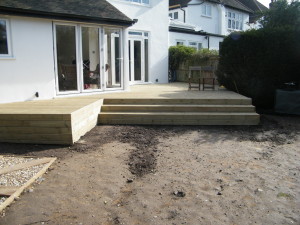 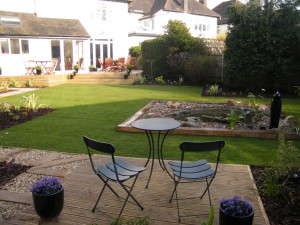 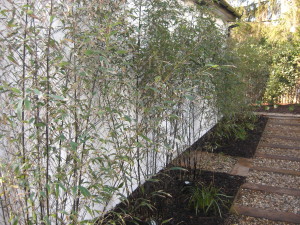 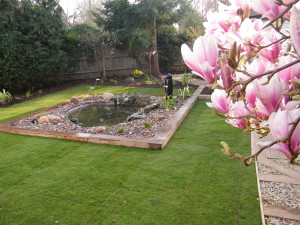 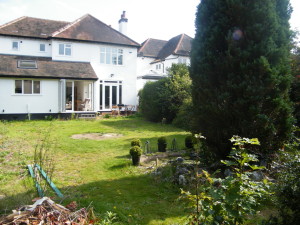 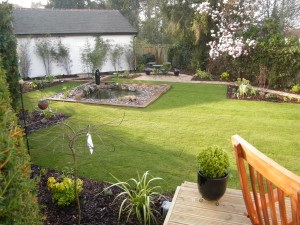 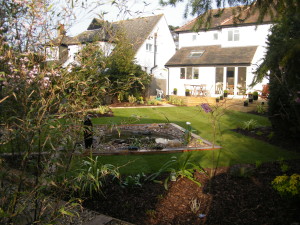 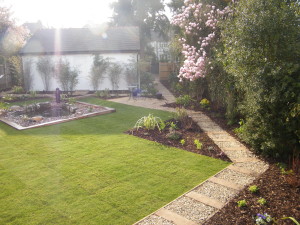 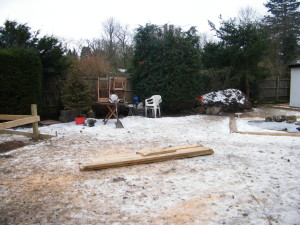 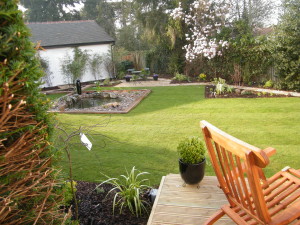 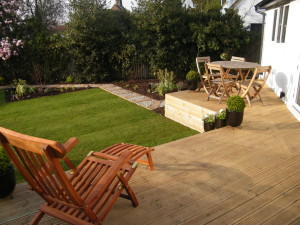 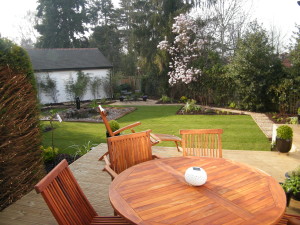 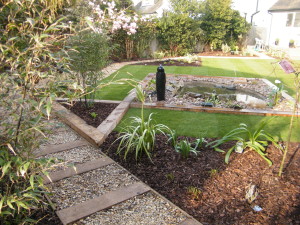 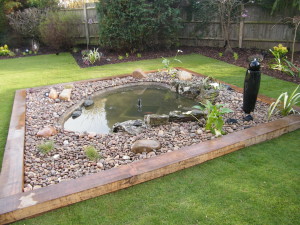 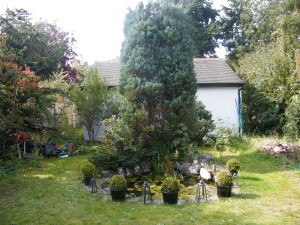 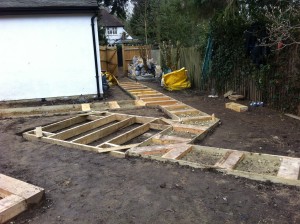 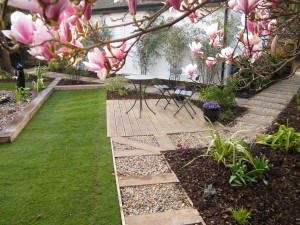 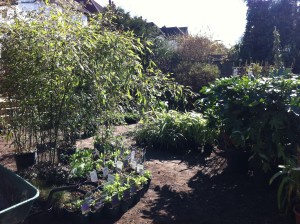 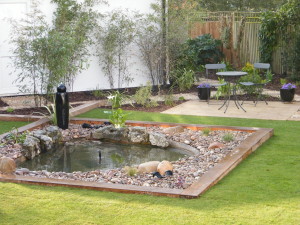 This is the broadly rectangular back garden to a sizeable, detached property in a quiet leafy road in Hayes, Kent.

The owners had spent a lot of time getting the house renovated to a standard that they were happy with and wanted the garden to reflect that same level of quality and style.

The interior of the house has a fairly contemporary finish and they wanted to continue that theme into the garden. We discussed shapes and came to the conclusion that a linear design composed of a series of squares and rectangles would best fit, although we suggested that we offset them on an angle to make the space appear larger.

The first area to tackle was the drop outside the new kitchen doors. We discussed the best way to deal with this and created a step out at threshold level onto the new decking.

This area outside the kitchen is large enough to use a couple of sun-loungers, with the main dining and entertaining area located outside the lounge doors.

At the other side of the house was a new gravel path set with sleepers and we continued that theme with a similar path down to the garage. We also using sleepers to construct raised beds for vegetable and ornamental planting.

On the corner of the path is a second seating area to catch the morning sun, which we built in decking to match the deck at the rear of the house.

The area of lawn is large enough for an active child to play on and it borders the existing pond, which we revamped to match the style of the rest of the garden. We used sleepers to edge it and light coloured stone for a contemporary feel. We also incorporated into the pond, a contemporary style, stainless steel water feature.

The original large conifer behind the pond had to go, and to keep the screening of the garage, we planted bamboos along its walls.

Our clients wanted to keep most of the rest of the large planting in the garden, as it provides them with valuable privacy. With judicious pruning and the addition of some more colourful under-planting, the scheme instantly had a mature effect. They liked the idea of bold, structural planting to give year-round interest and colour, but the scheme is fairly low maintenance and non-toxic, especially to cats as our clients had two small kittens. Favourite plants include Lavender, Agapanthus, Allium, daisies and grasses, and their preferred colours are yellow, white and purple. At our clients’ request, we made use of their existing black pots for some of the planting.

As they wanted to grow some vegetables, we created a planting bed along one side of the garage with herbs grown near to the house for ease of use.

Lighting adds an exciting dimension to the garden, making it not only useable on summer evenings, but also visually pleasing in the winter months. With lighting to the deck and steps, and uplighting to the trees, structural planting and water feature, the effects can be dramatic. However, with the use of different circuits, a more subtle effect can be achieved, according to the mood and occasion.

Take a look at the photos from this finished garden design Hayes!