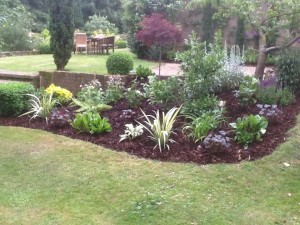 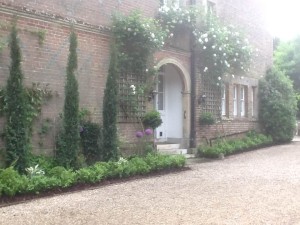 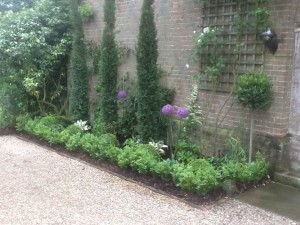 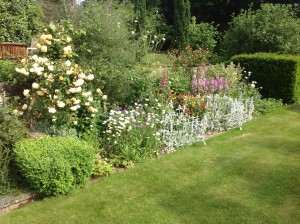 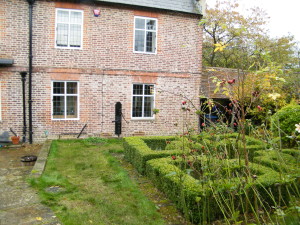 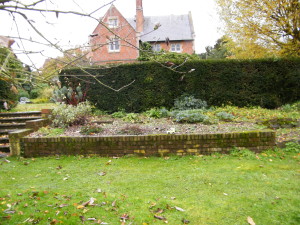 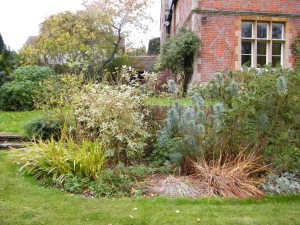 This is a Grade II listed, 18th century detached house in Goodneston.

At some time in its history, the house had been extended to create the main entrance to the house, which now sits to its north-eastern side. A sweeping drive leads to the rather imposing façade and front door, with shallow planting borders to either side of the entrance.

The gardens had previously been well laid out and planted with a wide variety of interesting and colourful specimens but over time, many things had outgrown their space and the garden has become untidy and hard to manage. As this is our clients’ weekend home, maintenance had become a bit of an issue, and so they wanted to create a new planting scheme that was both in keeping with the age and style of the property, and pleasing to the eye, whilst minimising the amount of upkeep required as much as possible.

The new scheme includes many of the existing plants, although some were relocated. Anything that was diseased, or had outgrown its space and could not easily be reduced, was taken out to make way for more suitable specimens.

The new planting throughout includes a mix of shrubs, herbaceous planting and bulbs to provide colour and interest throughout the seasons. Our clients were particularly keen that the borders in the main lawn garden should keep their wow factor as they are overlooked from the main reception rooms of the house.

This also applied to the beds either side of the main entrance in order to provide a welcoming approach to the house and a real sense of arrival at the property. We framed the doorway with formal Box topiary spirals and edged the planting beds with low Box hedging. The imposing façade of the house needed softening with a mix of vigorous (but not suckering) evergreen and deciduous climbing plants, to provide an extended flowering season.

The planting throughout the garden is traditional and typically in the style of an English country garden, and includes a mix of evergreen and deciduous planting, with contrast in leaf form and colour that is as important as the flowers. Favourite plants included Alliums, Agapanthus, Stocks, Acers, Magnolia stellata, daisies and sunflowers and there was no real preference for colours, as long as it all worked together.

There were dogs and young children in the house, so all new planting had to be non-toxic to both.

A mix of herb and semi-wild planting was put into the two beds in the play area to the rear of the garden and this completed the planting scheme.