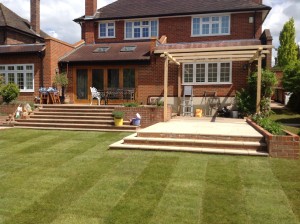 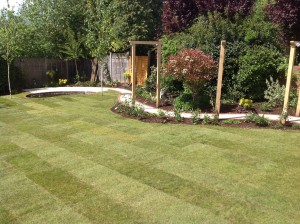 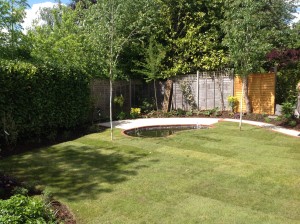 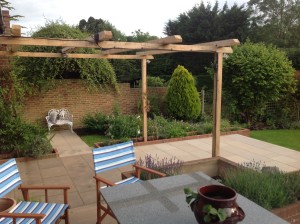 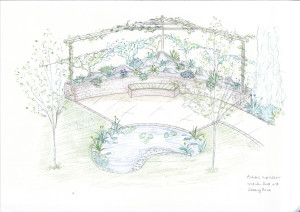 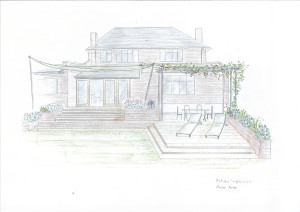 This is the back garden to a large, detached property in Epsom, Surrey set back from the main road.

They thought that the existing lower patio area was too small to put to practical use with a table and chairs, so wanted us to extend it further out into the garden so that it was large enough to accommodate garden loungers.

There also needed to be room to locate and use a free standing barbecue.

We were to create direct access to the lawn here, as originally the area was cut off from the lawn by low raised beds.

The existing raised pond was a nice feature to the garden, although the owners found that the spray fountain tended to become clogged possibly caused by plant matter and inevitable fish waste. They wanted the pond cleared and a low-level, single jet fountain installed instead, providing a beautiful reflective quality and the gentle sound of bubbling water.

The fish and plants were moved to a new, more naturalistic, ground level pond in the right-hand, rear corner of the garden. The existing paving there was used to accommodate the pond and also a small seating area.

To create an intimate feel to the space, and to give some cover for the bare fences, we backed the area with raised planting beds. This provides a visual link with the original raised beds near to the house.

The pond is a natural looking, kidney shape with a pebble ‘beach’ to allow birds and other wildlife to access it safely, and it now accommodates the fish and some marginal planting.

The new pond creates a wonderful focal point in the garden and also means that the unused space is now a place where the owners want to go and relax.

To avoid being overlooked, we created some screening in the form of planting.

As the garden is basically rectangular the large expanse of lawn was reduced and to disguise the shape of the plot we introduced some curves to the lawn and borders.

This means that the borders have been brought out to create both screening to the seating areas and more interest to the space blurring the boundaries and creating a sense of journey around the plot as it can’t all be seen at once.

A curving, paved path links the main patio areas with the pond at the back of the garden and this hugs the borders so as not to break up the lawn too much. Nearer to the pond this becomes a stepping stone path.

Along its route there is a pretty archway with climbers that will eventually grow around it.

The planting scheme is in the cottage style, including many old garden favourites, and is fairly low maintenance.

The garden already had some good established shrubs which we kept in order to provide a sense of maturity and also for the privacy they afford.

The owners had no particular preference for the colour scheme that we used in the raised beds, but wanted some perfumed plants and they particularly like climbing roses and the idea of an alpine bed near the new pond.

They also wanted some herbs near to the house and all new planting is non-toxic to accommodate the cats.

We added a shed for storage in the rear, left-hand corner with a water butt attached to it and a composting area which is screened off from the rest of the garden with trellis panels and planting.

Lighting adds an exciting dimension to the garden, making it not only useable on summer evenings, but also visually and physically accessible in the winter months. With additional up-lights to the structural plants, new raised beds and pond, the effects can be dramatic. However, with the use of different circuits, a more subtle feel can be achieved, according to the mood and occasion.