Reclamation and Sustainability within Design

Previously we discussed the viability of the night time garden and also promised a piece detailing the ways in which you can outfit your property to be more environmentally friendly, as witnessed by the products and practices exhibited at two of London’s largest ecological and domestic shows – Ecobuild and Grand Designs respectively.

Now with the recent trend, well necessity, for ecological conscience, in the previous decade, we have been so bombarded by advertisements, that concepts such as solar panelling or recycled turf will seem all too obvious to even the most pedestrian gardener.  Despite this I found myself surprised and enlightened leaving Custom House’s conferences and felt compelled to share what I had seen there, and the meticulousness and microcosmic attitude with which the environment is currently being catered to. 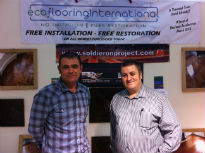 My major inspiration stems from a pair of self-described eco warriors named Jim Sanderson and his cohort Gary, who were representing their company Eco-flooring and Restoration UK at Grand Designs 2012. Their company is based around the reclamation of disused flooring and timber and rejuvenating those materials for later use, with an aim to save ten thousand trees worth of biomass – a goal they are well en route to achieving, having already saved a thousand trunks. I was fortunate to glean a few words from the pair between their demonstrations to a throng of other onlookers, where they aptly dubbed the work they’re doing as ‘No imitation, pure restoration’. 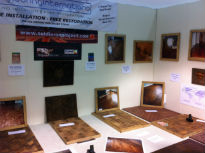 One of the key attractions of the restored parquet, Jim agreed, is the antiquity that the wood demonstrates and which can never be reproduced. The company will also produce custom designs and seals (we were privy to opulent coats of arms and even Superman’s iconic ‘S’ insignia) and has had past contracts with Rise Hall and Empire studios, home to outfits like The Arctic Monkeys and The Kings of Leon.

A secondary function of the company is as a supporter and contributor to the British charity ‘Soldier On’ which specialises in aiding the transition of injured servicemen and women to civilian working life, by promoting the life skills that armed forces training has instilled in them, such as discipline, organisation and determination. 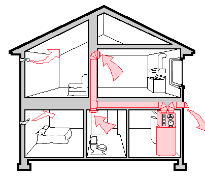 As the introductory title suggests, this article is focusing on the more obscure branches of ecological building, and next we’ll be discussing the possibilities of home-installed heat pumps. While this development sees its greatest investment during the design phase of construction of the home, it is important to note that companies such NIBE (Ecobuild 2012) will install post construction, and with the savings to be made to both environment and wallet, it’s incumbent upon us to share our findings.

The company has over thirty years of operational experience in its home country of Sweden, where installations such as these have been mandatory to new residential developments since the 1980s. The basic concept consists of heat extractors installed in the ‘wet rooms’ of the house i.e. the bathroom and kitchen, which recycle heat energy from exhausted air through ventilators and dispels the cold air to the outside. It’s easy to get lost in the jargon, I know I did, but what it equates to essentially is much less energy spent heating your home and thus an electricity bill less than half of what you’d be paying without the pumps. Good eh?

Finally, to demonstrate the range in scale of these ecological initiatives, I want to discuss a company called Balcony Systems Solutions that at the Grand Designs conference, introduced to me the idea of Advanced Glass Protection. The glass sheets of windows and doors are susceptible to the absorption of grime and pollutants, not to mention the wear and tear of hard water exposure – in other words glass gets dirty and it gets old and as a result loses its transparency.  While the AGP is not a permanent solution to this problem it does greatly increase life span of glass panelling, not to mention reduce the cleaning cycle of the glass 50-90%, and water conservation is therefore an excellent by-product of that characteristic.

So these are just some of the ways in which companies are joining the ecological battle for our planet.

In the next and final segment based around my visits to recent London shows, we’ll be discussing the possibilities of outdoor furnishing and annex structures like pavilions and huts and motifs that include architectural Americana such as the Tee Pee.